The crash in Beulah involving Deputy Hector Escajeda being removed from a burning vehicle made heroes out of the men who pulled him from a certain death. They are brave men to sure. However, Sheriff Morgan’s grandstanding for one of his own is pure fiction. Mr.Craig Morado’s valor is not in question. He went above and beyond as did his neighbors, John Shaw and his son and 2 other neighbors.  They pulled Escajeda out and away from the burning vehicle, but somewhere in the chaos Sr. Deputy Bobby Guy got attributed in being the one who help Morado. Several neighbors confirm they did not see Deputy Guy and he most certainly was not the one who helped Morado.

In a spectacle of events, Deputy Guy got an award recognizing him for “exceptional courage and selflessness in the midst of great personal danger”.This was brought to the attention of Sheriff Morgan who said everybody should just honor Deputy Guy anyway, because he has a family. Now what relevance does that have?  The men that actually saved Escajeda don’t want the recognition, however, the tall tale the Sheriff created insulted the people involved. Give credit where credit is due, but if he didn’t do anything, then what risk of danger was there?

And Deputy Guy. What sort of man accepts such an award knowing full well it is false? The moral fabric of ECSO is on display in this event. As country folks say, Morgan would rather climb a tree to tell a lie, than stand on the ground and tell the truth. Deputy Guy participating in this stolen valor  is reprehensible ethically. It just shows that Morgan doesn’t seem to respect valor or bravery. He does support taking credit for others peoples’ courage.  He has no  reverence to people who have honestly and courageously acted “with selflessness in the midst of great personal danger”. He believes you can hand it out like candy. For Deputy Guy, one of the “yes” men in Billings hoax of an investigation, to accept that shows you how far morality has descended in the ECSO. 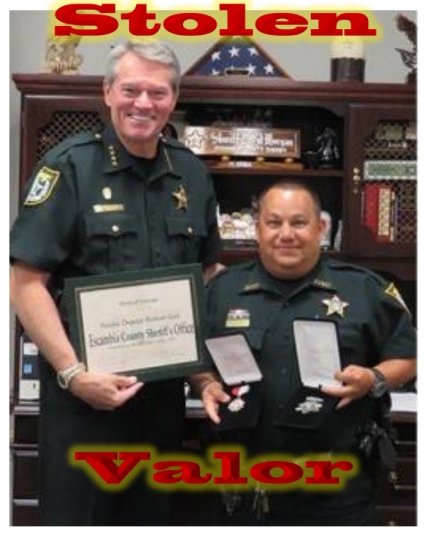