Chapter 4 of “The Devil Got Appointed in Georgia”

Robert “Cory” Sasser was a loose cannon as an officer of the law in Glynn County, Georgia.  In the course of time, he went even further beyond just being a loose cannon. Despite the fact, Sasser barged into his ex-wife’s home and threatened her, his actions were still not taken earnestly by officials and the judicial system. The Glynn County Police Department had him arrested for Domestic Violence. After being arrested, with privileged expeditiousness, Sheriff Neal Jump pulled strings by calling a judge after hours to do a bail hearing to get Sasser out of jail. This is the impetus of everything to come.

The domestic violence incident was May 13, 2018. At some point that night or the next day, Sasser and his friend, Robert Hamilton Moore, contacted Joanna Hall, the wife of the man with Sasser’s ex-wife to tell her about the affair between Katie Sasser and John Hall, Joanna’s husband. Sasser continued to annihilate every part of his relationship with Katie and created mass chaos, all around. The importance of this, is that it should have been another red flag for the trained professionals looking on. Although, it was not wildly known at the time, Sasser expanded his madness to include other people. Several “friends” of Sasser who were law enforcement officers should have seen his contacting of Joanna Hall as an alarming progression of the dire circumstances as they were occurring.

According to the Baxley Informer:

“Attorney Alan Tucker was contacted on May 15, 2018, by an employee of Judge Bart Altman and asked to represent Cory in court. Keep in mind that Judge Bart Altman was Cory Sasser’s defense attorney during the Caroline Small shooting. Caroline’s murder, and the way it was handled, had come under scrutiny over the years. Because of that, Jackie Johnson and Judge Bart Altman had a vested interest in keeping Cory’s name out of the media.”

Special protocols should have been taken.  However, in a divine reprieve, another intervening opportunity manifested. In the morning hours of May 17th, after Sasser was released, he called a another friend, Perri Rothemich. While on the phone with Rothemich, a gunshot was heard. Because of concern over Sasser’s welfare, officers and deputies started a search for him. After several hours, they eventually find him in a wooded area in his vehicle. Contact is made with Sasser and the SWAT team was called in.  A standoff ensued. When SWAT descended on the vehicle, they found Sasser had not injured himself  but they had to taser him to take him into custody for violating the terms of his bond.  He was also charged with 2 felony counts of Obstruction of Justice for this standoff. 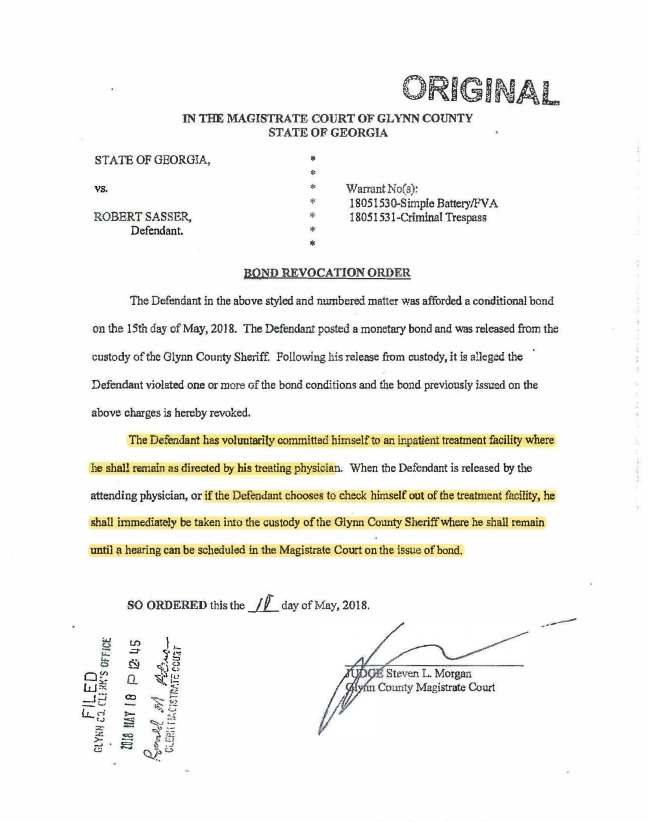 It was decided to take Sasser to a hospital for psychiatric evaluation.  The Sheriff and the Judges allowed this to happen preventing any arrest for felony charges by the Glynn County Police Department. They allowed Sasser to voluntarily admit himself to the facility for treatment with the caveat that if he checked himself out, prior to being discharge, he would be taken into the custody of the Glynn County Sheriff Neal Jump. This seems out of line with the best interest of the county as it was Sheriff Jump who sidestepped due process to prevent a criminal from spending time in jail.

While Sasser was in the treatment facility, Chief Powell went to the FBI in an effort to get federal intervention with Sasser to prevent any further issues. 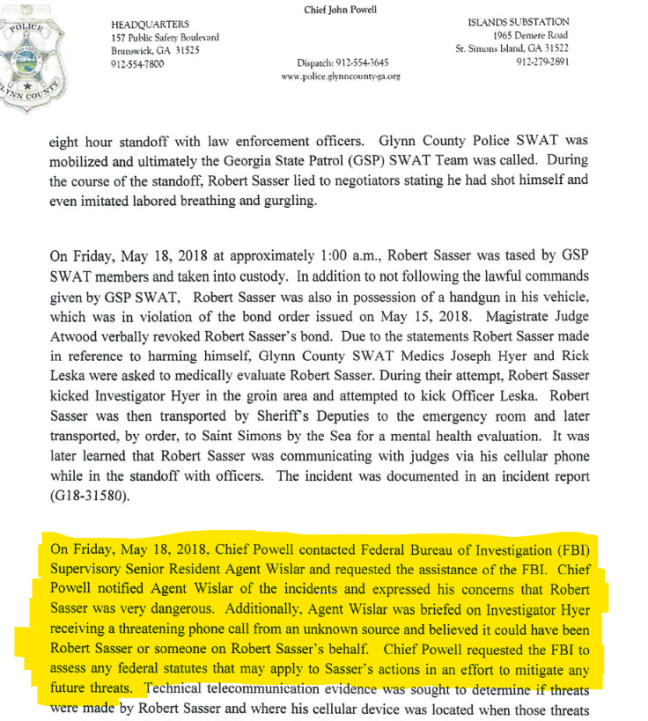 On May 21, 2018, when Sasser was released from treatment into Sheriff Jump’s custody. According to the Baxley Informer, still pulling strings for Sasser behind the scenes, Jackie arranged for a bond hearing on the felony charges and even appeared in this hearing. Court transcripts show that to be the case.

“….On May 24, 2018, thirty minutes before Cory Sasser’s bond hearing, Officer Hyer, one of the officers who Cory assaulted, (during the standoff) talked to A.D.A John B. Johnson. John immediately started the meeting by stating, ‘just want you to know that I will listen to everything that you have to say, but regardless of what you say, I am going to tell the judge that Cory needs to be released’.

A.D.A John B. Johnson’s mind was made up, and nothing anyone said would change it.

A.D.A John B. Johnson continued by asking Officer Hyer how long he had been a police officer. When Officer Hyer answered, “four years,” John condescendingly responded, “Well, I’ve been doing this for forty-one years and in my experience, there have been very few times where the offender has actually come back and actually sought violence against the victims.”

Officer Hyer disagreed. He was concerned for the other victims and believed that Cory Sasser would try to kill him. Then when Officer Hyer asked if he would be allowed to make a statement in court, John Johnson told him that he “should be able to.”

Per the Georgia Victim’s Bill Of Rights, Officer Hyer didn’t need John Johnson’s permission to give a statement in court—as a victim, he had a right to give it. Despite knowing this, John Johnson neglected to recognize Officer Hyer during the hearing and never told the judge he’d wanted to speak.

John Johnson violated Officer Hyer’s rights, and then completely disregarded the concerned statements made by Katie Sasser reported in the Crime Victim Liason logs (which, by the way, the district attorneys can access from their office).”

So without much consideration given, on May 24, 2018, Judge Flay Cabiness granted the bond agreement negotiated between the DA’s office.  Requirements in that agreement were for Sasser to turn over his guns to his oldest son and declare that Sasser be banished from Glynn County except for court appearances as well as barring contact with Katie Sasser or the officers he’d assaulted. The judge added that Sasser would be required to check in with his probation officer and showing his location via an app on his smartphone. This was in contrast to the requirements suggested by Chief Powell which were an GPS ankle monitor and seizure of Sasser’s weapons rather than depending on him to turn over weapons.

The phone app used for Sasser to check in on, was wholly voluntary as Sasser had to open the app and manually sign in to show his location versus the recommendation by Chief Powell, which would have kept constant track of Sasser’s whereabouts without his permission.  But Sasser had no intention of using the app; he contacted his probation officer to advise he would be seeking to modify the bond requirements and thus would not be setting up the app at all. The judge and the DA essentially left it to Sasser to comply even though he’d shown he was willing to violate his bond previously and was in a dangerously passionate marriage break up. Right off the bat, Sasser was changing the terms without anyone having any concern about the possible fallout.

As to be expected, Sasser didn’t honor his terms. Officer Hyer was right.