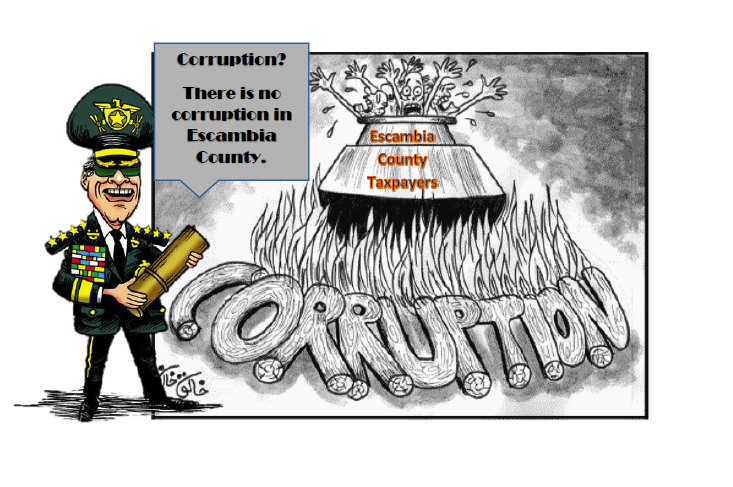 In case there are any questions about the performance of Ye Olde Sheriff, please consider this: the LET investigation of money mishandling is simply another red flag.

For those who may not know, the failure to disclose his military record is because Morgan made a deal with the Air Force. They were investigating him for misappropriation of funds (government credit card). This is the story that has come out of close friends that would be “in the know”, but Morgan eventually screwed them over. That is also how Morgan met Susan. She was with OSI and investigated him. The Air Force allowed him to retire quietly but he had to go. No criminal charges if he chose to do so. This story comes from multiple directions but it is the same account. However, the documentation is not there for the general public.

But I’ll play the devil’s advocate for a moment. If this doesn’t problematic for you as something that is not tangible enough, there are other incidents that show a predilection or pattern of behavior.

Recently a letter came out in PanhandlePolitico.com that was correspondence from an internal employee displaying the in-fighting that goes on with this administration, but the most fascinating thing in that letter is worth noting. It confirms what I have always suspected. The writer talks about flagrant disregard for checks and balances within the accounting department, especially as it pertains to seized assets. Henrique Dias, the CFO at the ECSO, seems to be less concerned about properly handling money than he is about employee retribution. We are not talking about children. We are talking about custodians of your money.

Henrique Dias is a character. He was arrested for soliciting a prostitute years prior to his employment. It was ultimately not prosecuted but after I shared this, last year, with many others via the Escambia Clerk’s site, it disappeared. Expunged most likely, but that doesn’t mean it did not happen. It is not just me but employees describe Dias as sketchy and over the last few years, he has ingratiated himself to Morgan–so much so, that Morgan put him in charge of his campaign money. 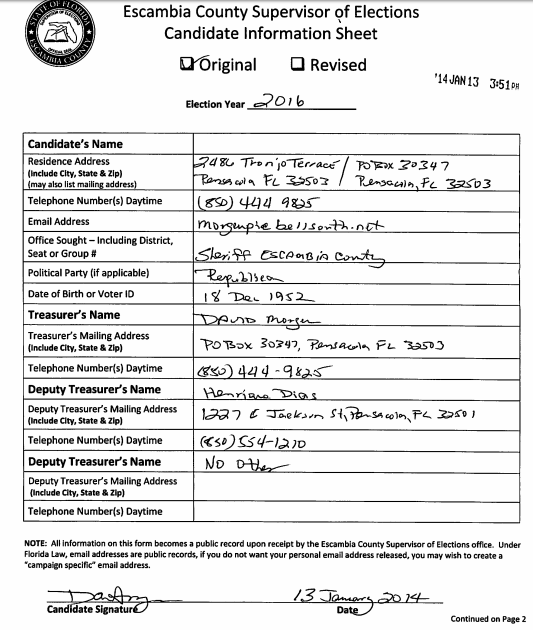 This seems counterintuitive. A supervisor, who has one employee found to be stealing over $1 million but has no clue until she retires, seems like a poor manager. Then, to see that same CFO show reckless disregard in the previous correspondence mentioned, certainly doesn’t reassure a rational person that he is competent to handle more responsibility.

In a private sector job, Dias would be held responsible for the money that walked out the door under his nose–at some level, to some degree. Then when he failed to comply with checks and balances put into place to prevent such an occurrence again, his boss should be questioning his ability to handle the burden of the county’s money. But instead of that, Morgan lets him handle his personal campaign money too.  Things that make you go hhmmm…

Now getting back to Morgan’s money skill. While he was not charged criminally, a source close to the governor claims that the infractions brought to light in Escambia County with the mis-spending of the LET fund were a state-wide plague.  There are 64 counties in Florida and David Morgan’s perversion of this liberty is a symptom of a bigger issue that cannot be handled by arrest and prosecution. The governor opted to change the legislation to address the problem but there for a few days, before this was decided to be the method to which the governor would handle this mis-spending, Morgan got quiet.  He sought counsel with a private attorney.  Why?  There was a moment in time that he was not sure he was going to jail over this action. If his intentions were as pure as he claims, would this have been the case?

Here’s the point here. whether any of the military accusations are true or the LET fund spending was “uncriminal” may be up for debate. However, the fact that Cathy Lister stole $1 million of the county’s money, there is a problem.Read her story.

Then going back to the letter above. It took almost 3 years for a system to be implemented after that to prevent future theft. That is unacceptable. To add insult to injury for the CFO to be resistant to these changes which are beneficial to the community indicates he should not have a job, yet he is given Morgan’s money to “handle” for his campaign.  Why? There is more than a sliver of question as to the integrity of this administration’s money handling.

Where does the buck stop in this administration?

I have not even mentioned the jail. The money grab from the BOCC that turned into them taking away of the jail. Again why?  It was money. Morgan had no interest in the jail or the conservation of that responsibility. He wanted more money to play with and when he was questioned by Gene Valentino, he started a political feud with him and turned over the jail. Why?

If you have any question about the management or mismanagement of county funds, you must consider changing the tide and voting Morgan out. He is the common denominator of all the issues.