Recently, there has been article after article about the corruption of the law enforcement agencies in the area. The attention was, at first, on the employees that were wronged, which is reasonable because those individuals are the most obvious victims of the corruption. When an employee is wrongly terminated, the process demands the employee to, ultimately, seek a court action to remedy the wrong. A court action is all that most people ever see.  The events that happen up until the filing of a suit, all the behind the scenes, or “the real cause”, is seldom known.  The public has not seen the battles or the battle scars, that nexus of the issue, or what lead to the “law enforcement gods” to eviscerate the rights of, in this case, their employees.

In each one of these cases, that are known, information provided by public records is the only understanding available to the general public.  If all the stars and planets are aligned, articles are written, using those documents, can explain the meaning of the records exposed. These articles and documents typically support the idea of poor leadership existing in the law enforcement community in Escambia County.

It is a common theme to see Sir David and his loyal followers act more as tyrannical dictators than public servants. The layperson would observe that free speech, employment rights, and laws, in general, are only rights reserved for the favored ones outside of the agency. Sir David wouldn’t consider applying those laws to his or his cronies’ actions.  His leadership proves that it is best to do what he says and ignore the rules. Rules do not concern him and are used to attack him improperly because after all he is David Morgan.

In Escambia County, Sir David has been seen allowing two favored employees to violate state law as the staff attempts to ignore it. Colleen Burt and Jessica Hackathorn, both committed law violations and their incidents were compared to past incidents showing that unfavored ECSO employees were punished for the same type of acts. Fortunately, they have been exposed and now, everyone is waiting for the reports of what action will be taken, if any.  Based on the patterns of behavior demonstrated over and over, the ECSO staff will drag out a simple investigation, hoping for the everyone who is watching to become distracted and not notice when that overt action is taken to put the “fix” in, to resolve the matter most favorable to the agency—not the law or the community but the agency.  It would be prudent for the ones guilty of overriding policies, laws and ethical codes to remember that because of the past issues handled inappropriately, attention to them will increase as they have been identified as corrupt.  This is something most people subverting the law might be cognizant of, however, arrogance is the biggest enemy to any criminal. And these criminals think they are ABOVE the law.

Still, even with those cases (or best described as crimes), many of the other incidents involved normal everyday citizens that are not aware of how to expose law enforcement corruption. Some may even be intimidated by the perception of power those such as Sir David possess. The citizens forget, just as Sir David did, that they are source of elected power and it is with them the actual power exists. Sure, it is a tough battle but what has worth, that isn’t worth a fight? It is not difficult for Morgan to destroy individuals in a battle. With cowards, such as Haines, paying his debt to Morgan, for boosting him well beyond his actual capability of a law enforcement officer nothing is off the table. Morgan easily motivates those lacking integrity to do the dirty work. Even if the staff doesn’t participate directly, they have no issue with watching the henchmen destroy, or attempt to destroy good people. This may even be worse than participating. At least, Haines knows he must jump when Morgan says to jump. This forces him to put in some effort and could even cause him to perceive he is doing his job in some insane thought process. Those, who watch, are not willing to act but see no problem in ignoring anything that doesn’t affect them directly. Would it be regarded as acceptable for a cop to watch a person get robbed by a suspect but not get involved because of fear of being harmed? Of course not, but that is exactly what ECSO staff does.

Another issue has been exposed recently. The Brady List. This is a list that has clear guidelines concerning the conduct that would cause an officer to be placed on the list. By reading the list, with information provided by ECSO, there is no indication of what criteria these officers have met to be on the list, nor to determine what that process is. The only real common denominator is that all on the list are disliked by Morgan and/or Haines. After reading the case law concerning Brady several times, it is worth mentioning that there is not one mention of anything that allows Morgan or Haines the sole discretion to place whoever they wanted on the list.

ECSO can’t say that all people who commit a policy violation of any kind should be on the list. Many have committed violations that were not indicative of their trustworthiness as an officer of the law.  It would be impossible to say all employees that are terminated are on the list. There was an occasion that a colonel was terminated and not listed. Maybe because Haines was fearful of the repercussion because of a lawsuit pending. However, if it is legal to put others on the list, why would he be scared to put that employee on there too?

A recent demotion occurred to an employee–a lieutenant, was busted to deputy. Two full ranks in the chain of command. Why does Haines think that wasn’t reasonable for that person to be on the list? Remember Burt? She was found to have lied on her timesheet and received discipline for lying.  This employee is exactly an employee that qualifies for the list. She could testify in a criminal proceeding about evidence and has proven to have questionable credibility by lying on a timesheet. If she would lie about work hours, it would be reasonable to be concerned she might lie about important issues that could have adverse effect on someone’s future in court. Now Hackathorn also has an issue too. She could be called to give testimony concerning officers committing insurance fraud or in at least, in one case, complain about it. She, then, is given a free pass when she commits fraud with a clear intent of a planned theft of services from the insurance company.

The truth is Morgan and Haines should be on the list. They routinely act in a manner that causes their character to be questioned. They act as if ruining the careers of others is a hobby. No hesitation to ruin lives when it betters the position for them. David Morgan was given proof of Lt. Forte committing perjury and ignored the complaint. The fact an official complaint of perjury was filed should have landed Forte on the list. This is a typical example of Morgan and Haines playing favorites. With a certified court transcript in hand, to compare to a statement under oath to internal affairs by Forte clearly lying, he is found not to have committed any policy violation even. It is often said that anyone can have their own opinion but not their own facts. It is clear the Brady List provided by the ECSO has undermined a check and balance process to help make certain law enforcement officers can be held to a standard that cultivates trust. Morgan and Haines made the choice to use it as a tool to punish those identified as enemies, further pushing public trust away from the good cops in our community.

Takeaway from this article:

Wrong is always wrong; right is always right. If one person is persecuted by  someone using a law or policy as a weapon, any person may be persecuted the same way. Corruption is equal opportunity with no one being safe.

I was shocked that THIS crime scene tech was actually applauded for this award, while no other such awards have been recognized with the same fanfare. But I suppose it should not have been such a surprise being that LEO AFFAIRS posts have been deleted about the open talk of the “oral” gratification this woman provides at crime scenes and the fact her nipple rings can be identified in a line up, Eric the social media Nazi, probably has sampled her talents.  While the one LEO AFFAIRS post addresses her by name, Escambia, & Santa Rosa reference her.

While the number of BJ’s given for the attention by Chief Deputy Nonsense is in question, the real question is why Colleen did not get the opportunity to go to jail for leaving her gun in the women’s restroom? James Higdon was burned at the stake for that but yet there is NO documentation on Ms. Crime Scene Nipple Ring, why?

Attached is the IA on Higdon, if anyone has any info on “lady” referenced here, please let me know. 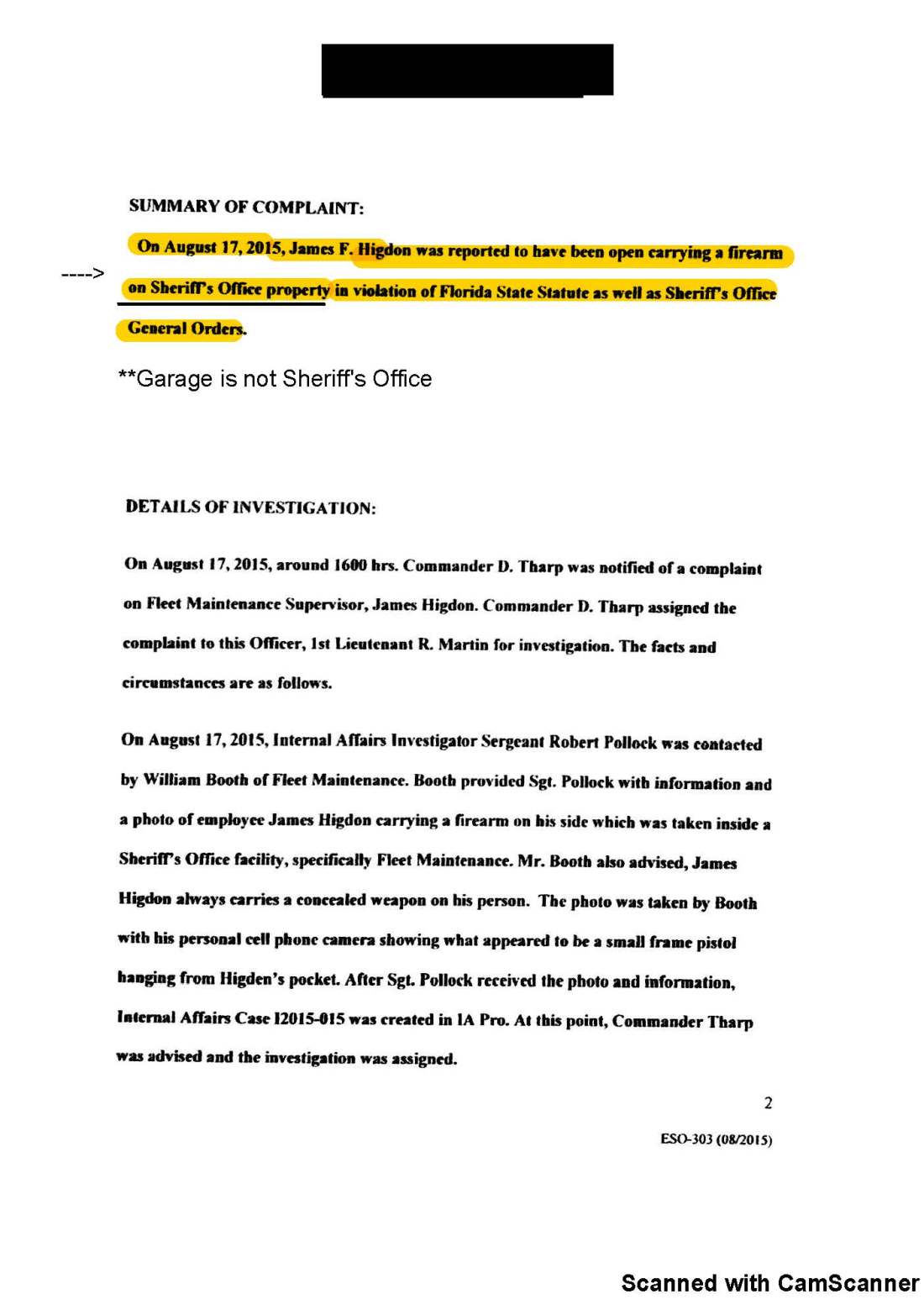 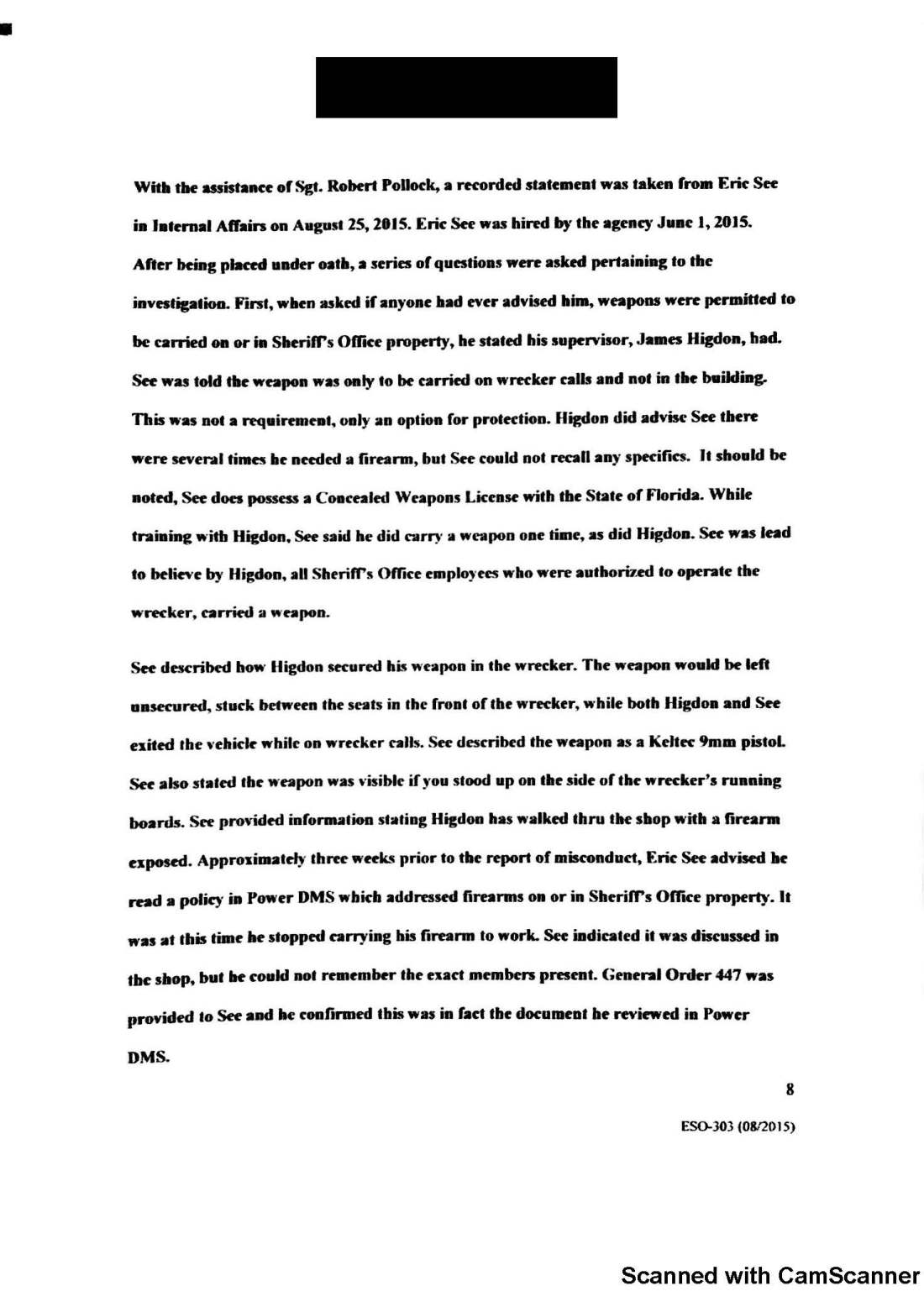 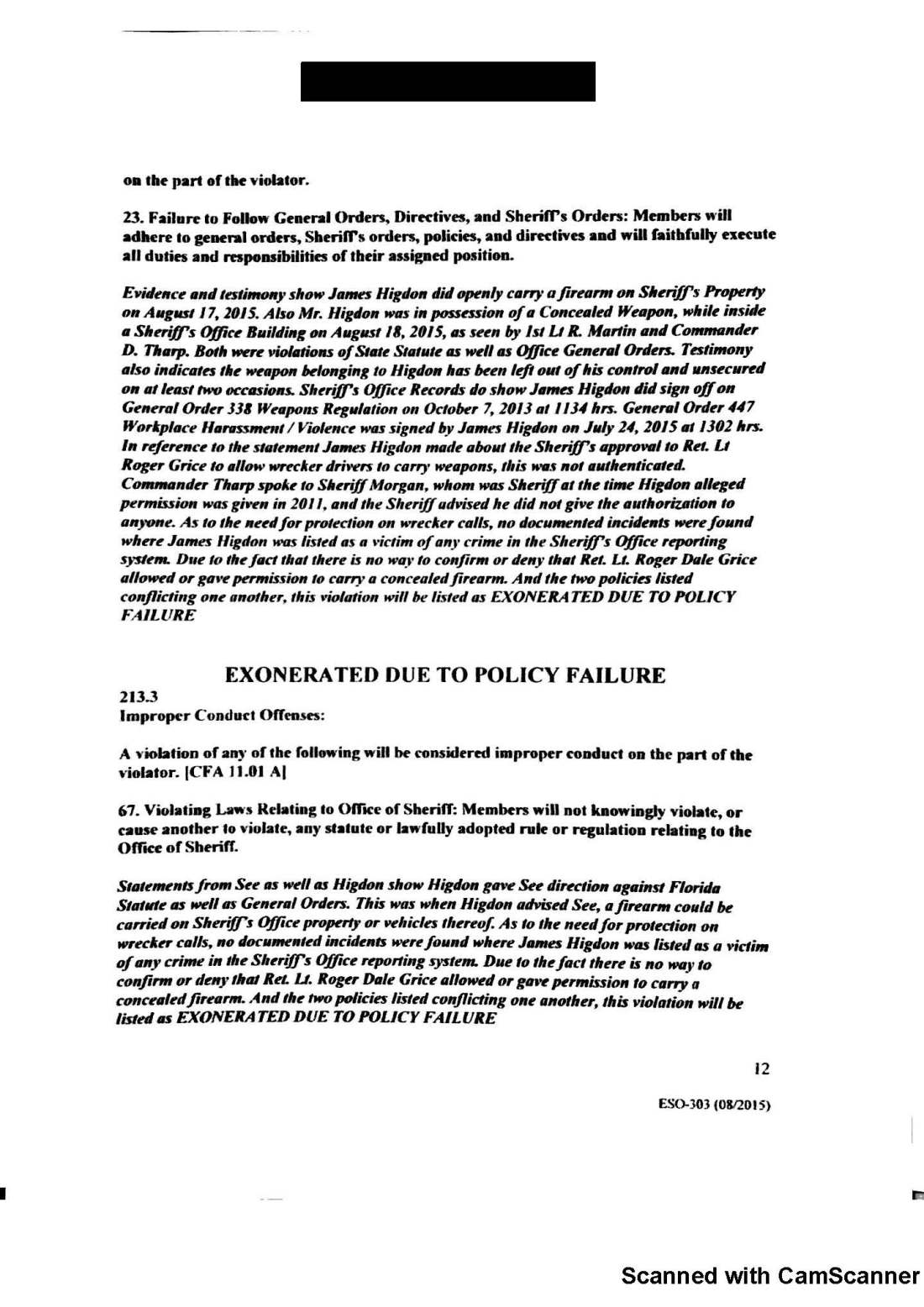