The most recent headline creates the Illusion that Sheriff Morgan has rid the ECSO of another rogue employee. The story has all the popular buzz words that would cause the reader to believe a dangerous “drug trafficker” has been removed from society. This criminal will not enjoy any benefit for being an employee of the ECSO and will suffer every penalty allowed by law. Sheriff Morgan has exposed her violation of law and emphasized his dedication to destroying the “good ole boy system” by offering her as a sacrifice to the citizens of our county.

For those not familiar with the hypocrisy of Sir David I’ll explain. It is entirely possible that the accused in this case has violated the law. She is not a favorite of any of the incompetent staff members at the agency. She is a very accomplished crime scene technician. She is the senior tech in that unit. She has been dedicated to her job and remained loyal for many years despite the low pay and lack of appreciation. She has attended training classes without fanfare or begging for the spotlight. She is a dependable employee with actual job-related skills. With all the attributes described, she should be held accountable if she betrayed the trust of the agency. If found guilty, she should be punished as would any person found guilty for this type of crime. The standard should be applied to all employees at the ECSO, I would think. The problem is, it is not how the agency operates.

Recently, there have been stories posted about other employees that were caught violating laws. Jessica Hackathorn was reported for committing insurance fraud. This is the same employee that initiated a complaint on an officer for having a step-child on the agency insurance plan after divorcing the mother of the child. The officer was placed on administrative leave and investigated for nearly a year. Evidence supporting that the officer committed no violation of law, was ignored. That exculpatory evidence included a court order stating the officer would pay child support and provide insurance. Any person would interpret this order, from a Circuit Court in this district, to be proof that a crime had not occurred. Somehow, that is not how Chief Eric Haines viewed it.

Chief Haines disagreed with the States Attorney’s Office that no charges should be filed. Haines has developed the reputation for being less than knowledgeable concerning law enforcement issues and having strong tendencies to avoid any display of honest behavior. If, in fact, he had truly believed a law violation had occurred Florida law allows him every opportunity to prepare an affidavit stating probable cause for the court to review. It would only be conjecture to speculate why he did not do this. One could assume his cowardly nature, fear of giving a statement under oath or just lack of intestinal fortitude, contributed to avoiding this option. What he did do is contact the Florida agency tasked with investigating insurance fraud cases. When informed there was not a fraud in this situation, by an official that investigates these crimes as a career, Chief Haines accused the official of misconduct by failing to file charges against the officer because of “professional courtesy,  refusing to believe there was a possibility he was simply wrong. Fortunately, Haines failed to succeed with his bully tactics and the officer was able to return to duty. Haines did feed his demented appetite for abusing people he dislikes by causing the officer to serve a short suspension before returning to duty.

Currently, Hackathorn has found herself in a similar situation. She put a child of an ex-boyfriend on her insurance policy at the agency. She is not the mother of the child and has no legal custodial rights to the child. I applaud her desire to care for this child and would believe she is a decent person to extend her affection to the child. However, she gave misleading information to the insurance company when asking if she could add the child to her policy. It should be mentioned that she would be considered the fiduciary of the insurance plan offered at the ECSO. Add the fact that she considered herself expert enough to file a complaint on an officer for having a “non-qualified” individual on the plan. She considered herself expert enough to even argue against a judge’s court order. I believe it would be extremely unreasonable for her to claim she made an honest error. Facts support what she did was manipulate the law and process to give her an out. She knew the process well and is well-informed on the rules of the insurance plan. She is the gate-keeper for the agency plan. Her job is dedicated to informing all agency employees on rules and answering questions they may have concerning the plan. Within weeks of illegally adding the child to the plan the child had an insurance claim for glasses and braces. I am not saying this was planned but I am saying it is suspicious. All indication here is that she willfully committed a fraud. Maybe, Chief Haines could inform us what he found out after talking to the state about fraud. Surely, he put the same effort into this issue as he did the one he investigated involving the officer.

Then the issue concerning a gun inside a county building. Jamie Higdon was a mechanic working in the garage at the ECSO. He was in possession of a firearm, while at work. There is written documentation that proves he had permission to possess the firearm during certain work-related duties. The state law allows for this. Again, enter Haines with his less than stellar knowledge of the law. An investigation is ordered, and the results are a surprising. The investigation revealed exactly what Haines had stated as law violations. The problem is with this matter:  Haines was wrong. One may ask how that could be. I’ll answer that. One explanation is that the person responsible for the investigation is as ignorant to the law as Chief Haines. This is entirely plausible, as it was one of the incompetent staff members of Sir David that completed the investigation. Another explanation is the investigation was corrupted by Haines. It is common knowledge that Haines never actually makes decisions that can be directly blamed on him personally. He uses internal investigations or another agency to do his dirty work. This gives him the opportunity to blame others and avoid being accountable himself. Either scenario supports the overwhelming opinion that the agency is corrupt and incompetent. Higdon ultimately leaves the agency. A superior employee lost to the poor leadership at the ECSO.

The comparable incident to this story involves Coleen Burt. She is a crime scene tech at the agency. She is often applauded for her stellar ability. Recently, Burt attended a training class and for her graduation, staff members went on a road trip to Tallahassee to celebrate. Never have I known of staff members attending an employee’s graduation ceremony out-of-town. Also, Burt works inside the main building at the ECSO. Her position is a civilian position. No civilian should be armed with a firearm in the area she reports to for work. This is an area defined specifically by state law as being an area that guns will not be in possession of civilians. Well, that isn’t the case for Burt. She mistakenly left her personal firearm in the bathroom while working. It is explicitly illegal for her to have been in possession of a firearm in the area and she carelessly left hers laying unattended for some period. The area is a secure area and often has members of the public in the area there for various business they may have at the ECSO. Had the wrong person found this gun before a responsible individual, what would happen? What if a child went into that bathroom and retrieved that weapon?

Let’s examine Burt. She has been involved in various “investigations” involving her propensity to be involved with individuals that are married or in some way relate to promiscuous behavior. Some jokingly comment her job title should be “Sex Scene Tech” and not Crime Scene tech, because there are more biologicals left by her than taken from a crime scene. This description is not “slut shaming” or being plain hateful. A public records request of investigations she has been involved in would support what is stated here, assuming Haines will, in fact release this information.

Here is a prediction. Hackathorn and Burt will never have to answer for the incidents described above. When their investigations are completed, no action will be taken. In fact, Hackathorn’s fraud related investigation is focused on the “leak” to Hunt insurance and not the lie/ fraud she committed. If the ECSO is called out, the defense will be the recent arrest of the employee in the headlines now. Morgan will use her as an example of just how honorable he is. He will say all employees are treated equal. You know now that he is a liar and that is not true. Do not allow him to do that when the time comes. 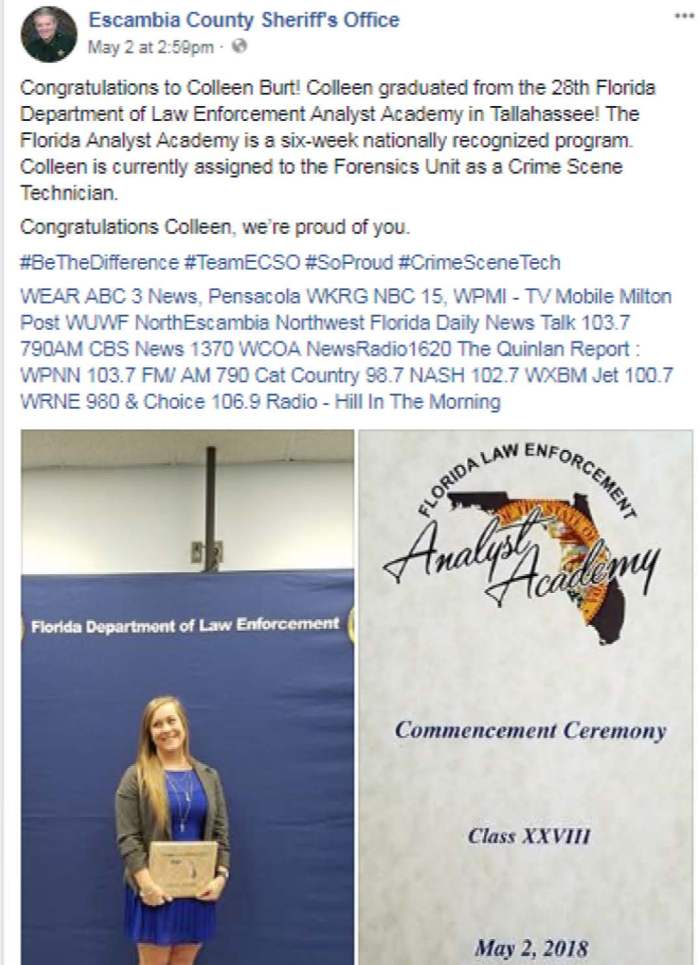 I was shocked that THIS crime scene tech was actually applauded for this award, while no other such awards have been recognized with the same fanfare. But I suppose it should not have been such a surprise being that LEO AFFAIRS posts have been deleted about the open talk of the “oral” gratification this woman provides at crime scenes and the fact her nipple rings can be identified in a line up, Eric the social media Nazi, probably has sampled her talents.  While the one LEO AFFAIRS post addresses her by name, Escambia, & Santa Rosa reference her.

While the number of BJ’s given for the attention by Chief Deputy Nonsense is in question, the real question is why Colleen did not get the opportunity to go to jail for leaving her gun in the women’s restroom? James Higdon was burned at the stake for that but yet there is NO documentation on Ms. Crime Scene Nipple Ring, why?

Attached is the IA on Higdon, if anyone has any info on “lady” referenced here, please let me know. 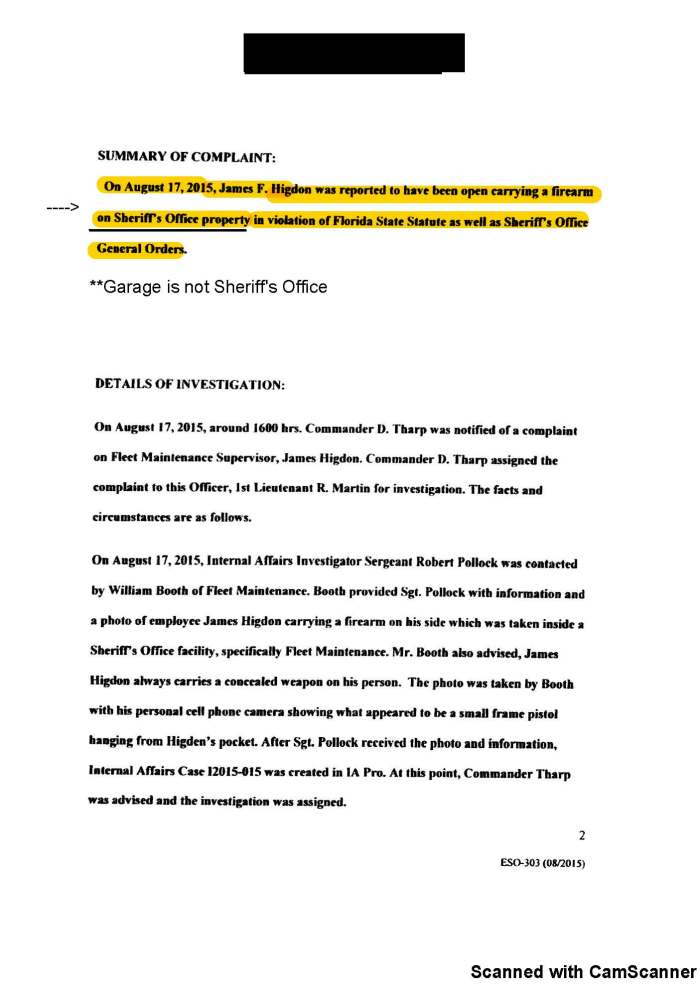 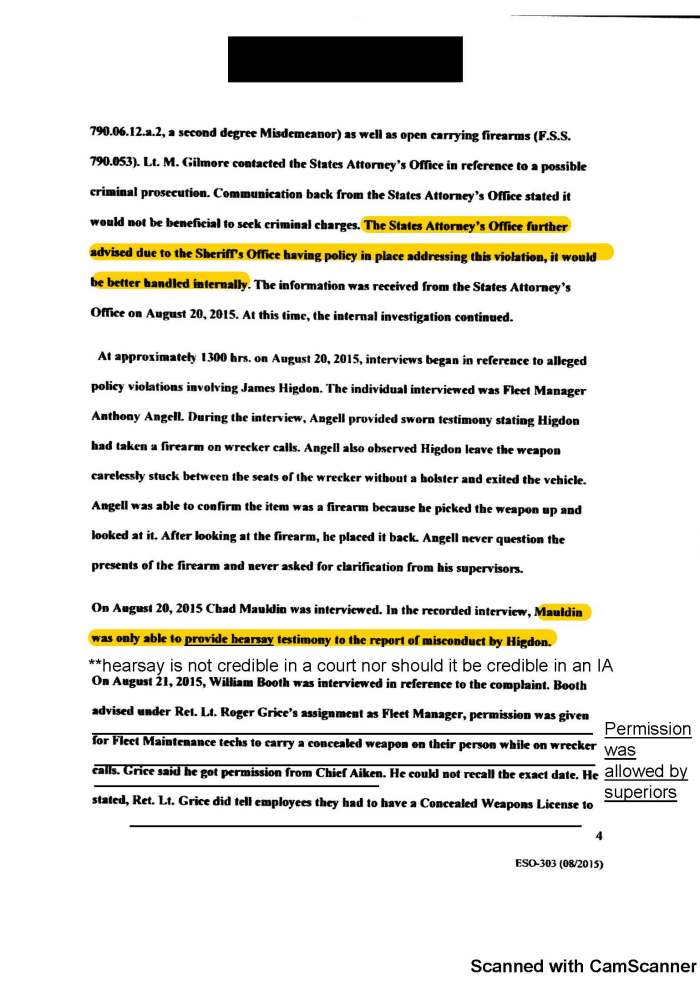 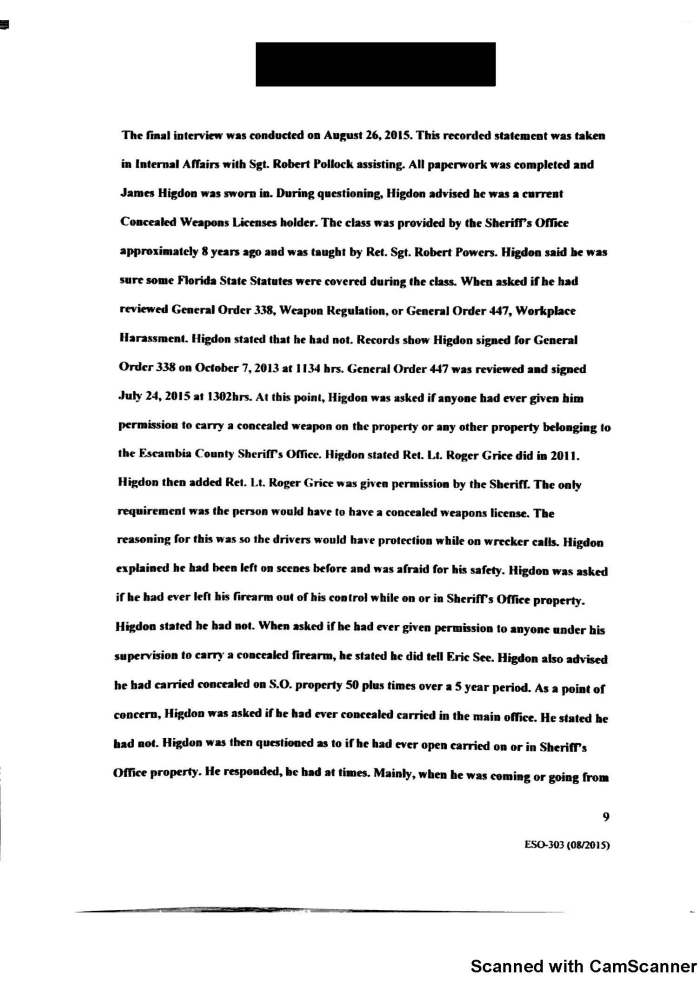 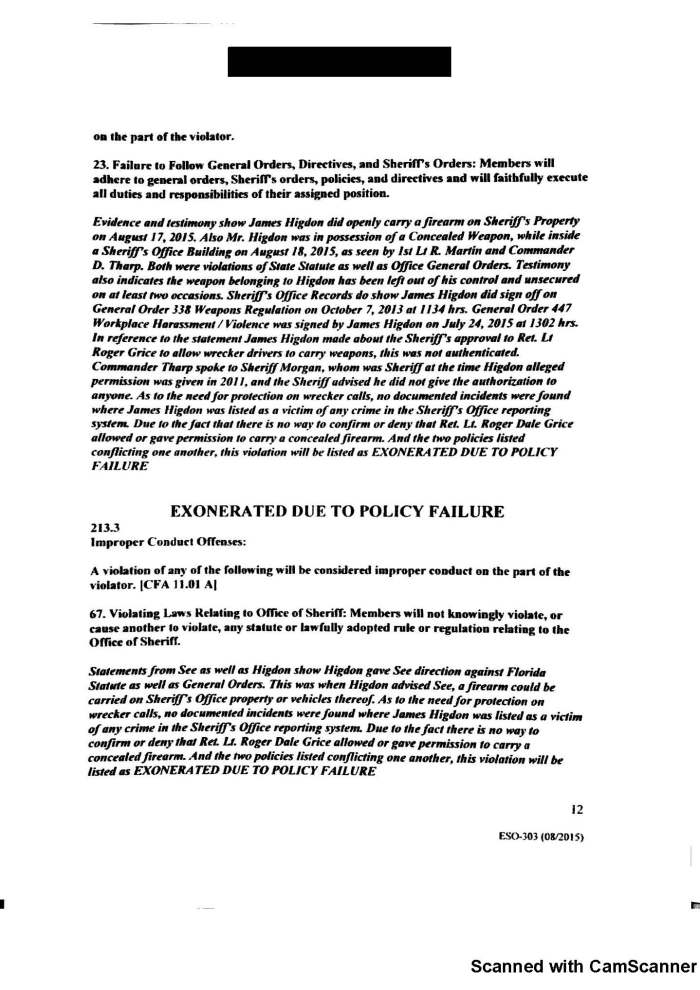 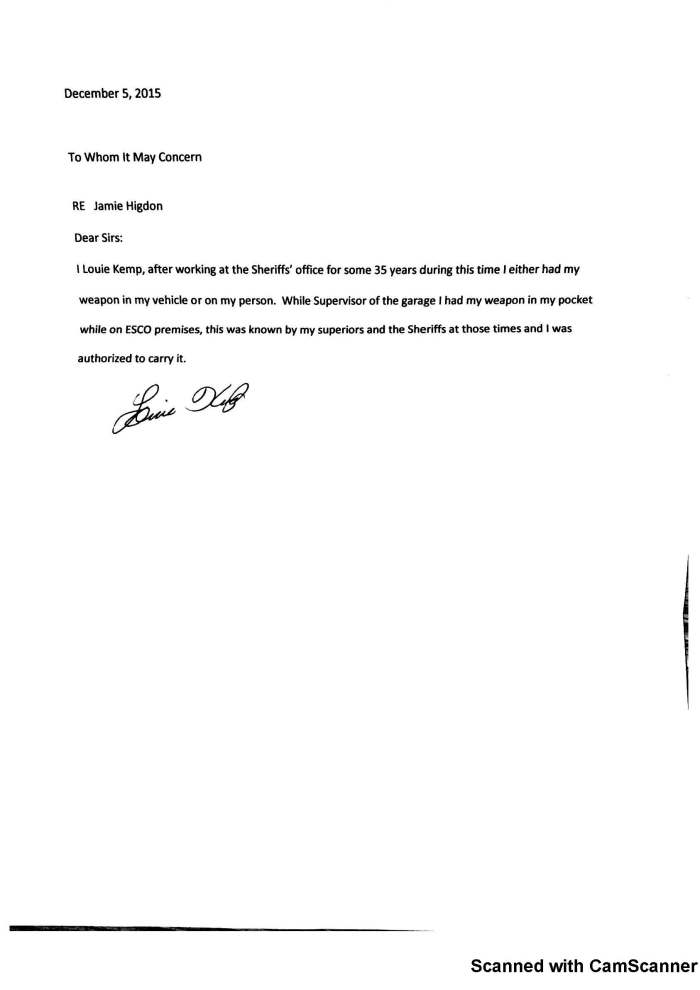