It is not difficult to describe the dysfunction of the ECSO. There is more material to work with than you can imagine. As employees, we see the double standard that is in this place daily and routine for those who are at the top. The constant chatter is that the ECSO has never been run by anyone with the integrity of this administration. As observers of the inner machinations, we are disgruntled when we perceive that the administration–any administration– is incorrect or wrong about an issue. That is commonplace in every organization, but, in this administration, there is no tolerance for disagreement with those who nest in the Ivory Tower.

It is confusing how they believe they are so deserving of respect when we see the workings behind the curtain. Morgan has not made any effort to encourage the officers that work for the ECSO. He spends money on coins to give away so he can look important. If you are lucky,  you may have the chance to be given one–if you are in the right place, at the right time. He gives thousands of dollars to organizations that have little to do with improving communities, drug awareness or crime prevention. But none of those are real problems, according to Chief Haines. They easily circumvent the law due to the vague construction of the

statute. He actually said that on a live radio show. This is an example of just how honest they are. They are so honest that they will admit on live radio they take advantage of the money from LET because the law isn’t clear.  Wow……..that is alarming by any standard.

We could look at some of the ways Morgan could have spent money from LET that would have been completely honest and would leave no room for judgement.  We can start by looking at equipment. It is not a secret that officers are seeing suspects that are armed with superior weapons than the standard issue 40 cal. handguns that are those issued for deputies. All of the officers assigned to patrol could be equipped with a weapon that would give them an equal chance of survival with an armed suspect. The cost for all officers assigned to patrol, to be issued a weapon that is adequate, is roughly 120K. That is less than the cost of the billboards that have Morgan’s picture plastered on them with the idiotic advice of locking doors. No shit, Moron. I doubt any of us who own a vehicle were confused about what that clicky thingy was on our doors! Yet, he decides to go and spend 130K on putting his picture out there on every sign he could buy. We are supposed to believe  him when he explains that it was a coincidence that it just happens to be a political season. You have got to be kidding me. If he thinks anyone with a brain, with actual activity, believes that, he is an idiot. Of course he bought the signs with the idea that he would be seen everywhere and was assured by his intellectual giant of a Chief that he could smooth it over with deputies who disagree.  The law of the land is this: “The minions will be told what they are to think and that will be that. We will fire them if they think independent thoughts without permission.” Just ask Buddy Nesmith.

There are some good causes out there that could benefit from LET money. We could start with youth sports. It is a great cause and many kids are saved by being involved in team sports. However, Lumon May is not the only one who is involved in sports. There are many deputies that take the time to coach kids in a variety of sports. Why would Morgan not let every employee know that the agency they work for will help with any sponsorship that is needed for youth activities? The majority of baseball teams are required to raise an average of $500 for a full sponsorship of a team. If you consider 25K given to Doug Underhill for the Cyberthon program, helping approximately 50 students a year ($500/per student), it starts to be concerning. That same amount of money would have sponsored 50 baseball teams. There is an average of 13 kids on a team. Morgan could have helped 650 young people (at about $39 per student) with a chance to experience the joy of being a part of a team. He could have offered a chance for 650 kids to be off the street learning about something other than drugs and crime. This is a good analogy of the community. Morgan wants to help the few–more elite– than the many whose lives could be changed by that $39.

In case the point was missed, I’ll explain further. Morgan cares about pleasing a certain few that increase his positioning in life. May and Underhill to name a couple. I mentioned the name Lumon May and left out the details that even his brother is in on the gig. These two guys are in charge of raising money at ball parks and churches all over the county. The same guys that refused to obey lawful commands of a sworn police officer. These two people get the proceeds from our agency that was obtained by officers risking their life. Why? I can tell you that it is offensive but only a person that has been a cop would know how it truly feels. It is so insulting to see Morgan give money to these guys when he has seen the conduct and sense of entitlement they display when involved in a situation they don’t like. Morgan would have no idea how this feels or looks from an officer point of view because he failed to ever become a cop. He can’t rely on his staff to inform him because it has been established they are mere peons.   I guess it is a way to buy his way into the club and it has a net cost of zero to him. He didn’t risk his life obtaining the funds. Why would he care who gets the money?

In all fairness he has given to PHS girls soccer……wait I think a campaign contributor has a kid on that team. In fact, that contributor happens to be the CFO for the agency. Would there be any bets on if the name Underhill shows up? If you said yes you would be correct. It almost slipped by because the donation is in the name of the wife of Underhill. I guess they didn’t think we would put that together so fast. That is only a quick look at the contribution report. Imagine what would happen if someone actually took the time to look at each contribution and each LET expenditure. It isn’t just Morgan that is to blame. The people on that list know what is happening. Especially Underhill, a quick search of public records would show he has extensive knowledge of how to manage money or maybe mismanage would be a better description. This is the guy that Morgan considers best for the job. He has no proven record of managing even his personal affairs and is slippery at best.

If you listen to Morgan his “blind” promotion system has been a wonderful addition to the agency. If it works so well why wouldn’t he use it for his staff? One reason could be Haines and his wife probably wouldn’t donate to him. Tharp wouldn’t donate. He would lose thousands of dollars from his staff. It is such a hypocritical message and insulting to believe Morgan thinks everyone is too stupid to see it.

The truth is that Morgan does not care about the employees or the kids. Haines said it best “we can use the money for anything because the laws are so vague”. With that mentality why would you care about using the money for what it was intended to be used for in the community? Use the money for what best serves the needs of the administration. It is not a secret that all of the administration will be job hunting if Morgan gets beat. Where else could they go and have such a commanding presence with so little ability? 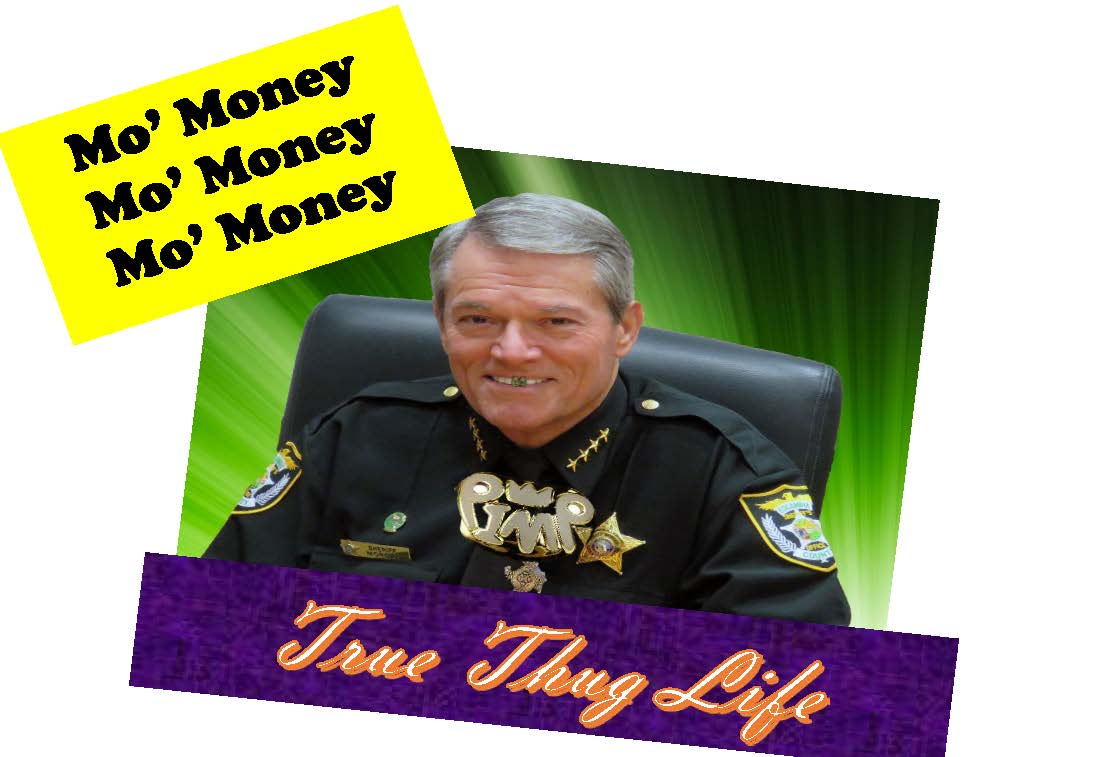 The dangerous part of all of this is that it just shows Morgan’s disregard for the safety the community. The crime stats just prove that it is harmful to all of us for this man to be in charge at the ECSO.  He gives cops all over the country a bad name. Then as if that isn’t bad enough Morgan have the audacity to claim that “his administration” possesses integrity. Simply put………………….PATHETIC!

So in a nutshell……..we, the deputies, are not so stupid after all. We know what Morgan is doing and it makes us hate going to work. The problem is–until someone sees it– we, the deputies, are stuck. We are all caught up in Morgan’s game of expanding his influence and wealth.  We are being used and will be promptly thrown out when we serve no further purpose to that end . A man in his position that cared about employees and the community would not be so careless with the money that men and women that are truly honorable risked their life to get.