An anonymous guest writer from within the Escambia County Sheriff’s office asked me to post this in response to the civil unrest over police brutality. I am compiling a post to accompany this post for later this week.

Do we have a loose cannon at the Escambia County Sheriff’s Office as well?

On December 1, 2014, Deputy John Beard and another officer were involved in an incident in which Deputy Beard tased a man five times. The man died a few weeks later and a lawsuit was filed. This is a news article of the incident: 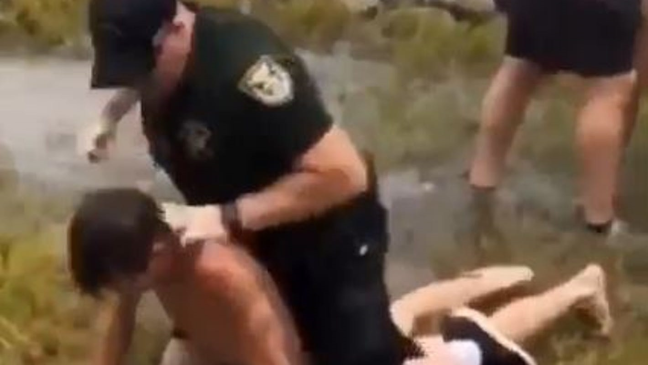 On February 18, 2018, Deputy John Beard hit an arrestee who was already handcuffed. This incident was not caught on video; however, Dep. Beard was cleared of using excessive force because he claimed the arrestee attempted to head-butt him (ECSO18OFF003324).

On July 14, 2019, during the Blue Angel Airshow, Dep. Beard was attempting to arrest a subject on Pensacola Beach. The video of this incident went viral and depicts Dep. Beard on a man’s back.  The man was in the water and appeared to be resisting, or not complying with, Dep. Beard. Dep. Beard punched the male and eventually took the man into custody. Several officers observed on the video stood around and did not assist Dep. Beard. Text messages between administrative employees at the ECSO indicated that the man was in the hospital, unconscious, two days later. The arrestee was said to have been extremely intoxicated at the time of the incident. Deputy Beard may have also injured his hand during the incident as well because he was seen in a news video with a cast on his arm not long after the Blue Angel Airshow. According to a PNJ news article, the ECSO stated that they would be reviewing the Blue Angel incident. The results of this review have not been released publicly to my knowledge.

On 09/15/2019, Deputy Beard was again involved in an arrest in which he hit a man who was already in handcuffs. Again, Deputy Beard claimed the man attempted to head-butt him, but according to the other officer on scene this did not happen. The other officer on scene, Dep. Ward, noted in his supplemental report that he felt that Dep. Beard’s use of force was excessive. The incident was investigated and Dep. Beard was EXONERATED!! What happened to the whistleblower in this case? The other officer on scene? Just as expected, and in true David Morgan style, Dep. Ward was suspended for a week without pay. The ECSO’s new Use of Force Expert is a training Sergeant. That Sergeant claims that many things COULD HAVE happened and Dep. Ward was punished based on what COULD HAVE happened because he did not participate in the incident to the liking of David Morgan. Dep. Ward was never allowed to give his account of the incident and was punished based on, once again, what MIGHT HAVE or COULD HAVE happened. And Deputy Beard? Well, he received no punishment for what actually DID HAPPEN. Why?? Is it because they did not want the public or the attorney for the first case to become aware of Dep. Beard’s actions since the lawsuit was filed? Too late.

And if that’s not enough get this…the Sergeant in training. The new Use of Force Expert, utilized by ECSO’s Internal Affairs Unit as an expert when they deem it necessary, is none other than the Sergeant who left a high-powered rifle and other miscellaneous ECSO equipment/ammo/etc. unsecured in his county-issued vehicle and had the items STOLEN!!! Was this a policy violation? Yes! Did he receive punishment for this incident when the guns and other items ended up on the street in the hands of criminals and some of the equipment was never recovered? NO! He was placed on Administrative Leave with Pay until the incident blew over and then transferred to train the new recruits! Do you think this Sergeant owes David Morgan for overlooking his “little” indiscretion/policy violation enough to write up an Internal Affairs case to David Morgan’s liking? One would tend to believe so.

One would also tend to believe that there may be other incidents involving Dep. Beard that have been overlooked, unreported or under-reported. Public Records requests sent to the ECSO to obtain a copy of the video from the 2019 incident have been ignored and unfilled. Why? David Morgan believes he is above the LAW!