I am highly disappointed in myself for the lack of postings I made on this blog. So many things happened last year.

– The CFO of the ECSO was MIA for months and no one could ask about him.

-Morgan publicly showed his ass regarding pay for the deputies that his agency kept.

-Scott Trotter, a Democrat, united many Republicans & Democrats in an effort to overthrow the ineffectual, pathological liar, Doug Underhill. This was unprecedented in this political climate in the Panhandle. While the media perpetuates the flames of division in partisan politics, in Escambia County, the opposite was happening. People with differences put them aside to make the community better. Despite having lost, Trotter brought about a way of cooperation that could be longstanding in the community. That is huge.

-Morgan was slapped on his hand regarding LET money but with the incoming BOCC Chairman, Lumon May, this may have only been a temporary measure. Lumon backslid after the election. His flip-flopping view on Underhill and his ways of deceiving the BOCC have all been forgotten by May and Underhill and Morgan are his BFF’s again. A step backwards for the county, indeed.

-The continuation of convicting people, who are likely not guilty of the crimes they are convicted, continued. Robert Howard, the man arrested for murdering Naomi Jones, is possibly being wrongly convicted. In looking at her autopsy, it is impossible to call her death murder. Her hyoid bone is in tact…due to marine predation (animal feeding) there is no evidence of sexual assault either. This guy may be guilty but her autopsy does not support that. Yet he will likely be convicted due the media and law enforcement comments to the public.

Mary Rice is another one that is probably not guilty of the murders for which she was convicted of. Most certainly, according to deputies, Morgan is responsible for Kayla Crocker’s murder. Morgan ineptness as an LEO led to not searching woods close to Crocker’s home that Boyette and Rice were indeed hiding in. Morgan was convinced the ditched car next to woods was a result of Boyette ditching the car to get on the adjacent interstate. He refused to use resources made available to him to search the woods. Deputies frustrated by this decision called me from the location. They thought it was worth investigating and Morgan said to stand down. This decision resulted into Crocker’s murder. Yet somehow Mary Rice is more culpable than Morgan.

-A good friend of mine, and a hell of a reporter, Hayley Minogue of WKRG was summarily fired after being transferred from Pensacola to Mobile coverage after she pissed off Sir David in a Naomi Jones press conference by asking him what he thought the motive of her motive was. Morgan’s classic response, “I am a law enforcement officer. I don’t care why…..I leave the whys to the psychologists and the script writers.”

The insane part of that statement is that motive is usually the one thing that leads to an arrest. Motive is stepping stone to catching the suspect. Was it a sexual predator? Was there a personal riff that ended in accidental death? was this a suicide? The “why” always factors in to the “who did it”. That is why mens rea (intent) is so important; it is one of the elements of a crime and successful prosecution. If you don’t have a why, then anyone in proximity could be arrested as a potential killer. It is the why that narrows and eliminates the field of persons of interest. Anybody that has ever watched “Law & Order”, “Matlock” or “Perry Mason” knows that..it isn’t rocket science, yet ye olde sheriff doesn’t care what the why is.

But I digress, Morgan felt humiliated by Minogue’s why question and blackballed WKRG from info from the ECSO. Minogue was re-assigned to Mobile and later fired. Ironically, as soon as she was fired, WKRG came off the blacklist at the ECSO. Funny how that works.

After all these things happened, the bumbling Sheriff still has pull in the county. I think the citizens should scrutinize that for themselves. 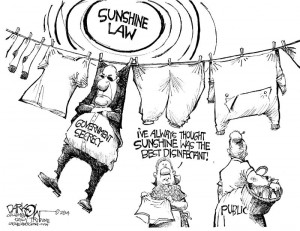 It’s not Whataburger but maybe this is their interpretation of complying with Sunshine Laws. 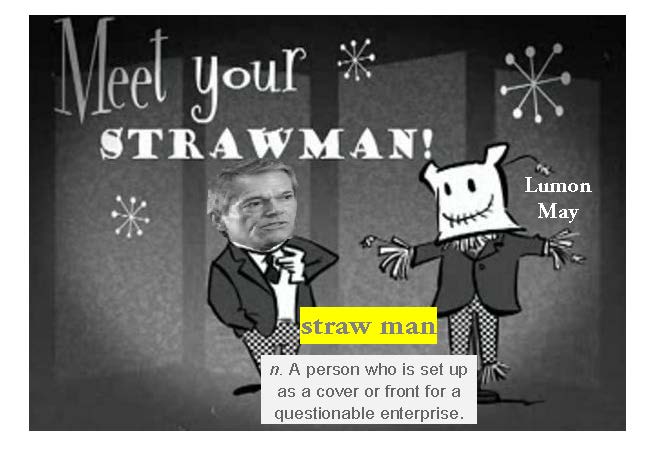 The HONORABLE David Morgan, Sir David, has taken the people for Escambia for a ride. Although that may be common knowledge, when I was talking to a colleague about Sir David’s dense, lack of understanding  of the statute that regulates the spending of the LET Fund (or as he might refer to it, his incentive account for his campaign election), the point was made that Sir David cannot do this on his own. There has to be people on the Escambia Board of Commissioners signing off on that. Well we know about the Doug Underhill “friendship”, but the person who appears to have signed off on much of the mass spending over the last couple of years is Lumon May.

So I went through 2012-15 LET Funds to see if there may be some GOB politics (one hand washing of the other) with Lumon and the LET donations by the ECSO.  I was shocked to see that while the donations seem to go to noteworthy charities, there is a reciprocation. I noted that there was some huge donations over that time to certain agencies and the lack of funding of others.   Here is what I found:

Now the May Brothers (Lumon & LuTimothy’s) organizations made a huge jump while Gulf Coast Kids House received a drastic reduction. Not to mention, the nearly $7K in church and booster club money that has no impact on anything relevant to this fund.

Now look at the next 2 years: 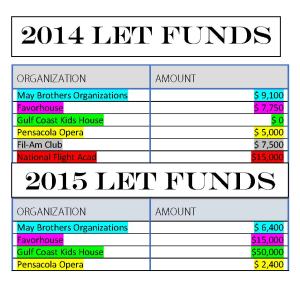 Gulf Coast Kids House is the most prominent difference (thanks to the payoff for the deputy sex scandal). The May Brothers went down, because the Chairman of the Board of Commissioners has shifted…coincidence?

There are other things that were horrible abuses of the fund that don’t fit the statutory obligations of the fund, like 2014, Fil-Am Social Club received $7000, Pensacola Inflatables received $1180 under private organization money; 2015-Blue Angels got $20K, Brownsville Assembly of God got $2500 for a church van and again the $10K over 2 years of school booster and Marcus Point Baptist Church donations and another $5K in strictly church organizations like the friggin’ Men’s Barn Dance. Really? This money is supposed to be ear-marked for crime prevention programs, community safety, drug prevention and training material to better the deputies….not this non-sense.  Buying votes and influence is a toxic waste of funds.

While Escambia County becomes increasingly more dangerous and closer and closer to bankrupting itself on frivolous money wasted, your Sheriff, the HONORABLE Sir David, is spending money on everything but the community. He is charitable with taxpayers’ money but not his own…kinda funny how that works.  Most certainly it has been favorable for Lumon & LuTimothy May. From 2012-2015, these organizations who are so honored to be affiliated to this family received $39,000+.