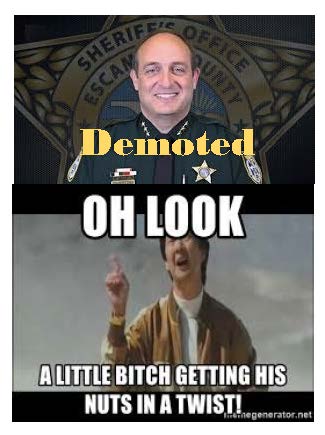 Chief Deputy Haines chose to self demote effective May 1st; he will be a lieutenant working in cyber crime.  Speculation is that he is seeking protection from PBA.  That seems terribly unlikely with all the acrimony Haines has caused. I am also hearing he has the ability to “back out” of such a deal, anytime prior to May 1st.

This was a result of Eric trying to somehow be a part of Chip Simmons’s campaign. Chip declined the offer. There was a push to get some assurance of Haines’s job security when Chip becomes Sheriff. Seems as if Chip planned to put him in a innocuous, non predatory position, if he was kept at all. This lack of future job security ostensibly rattled the poor bastard because he agreed to self-demote to lieutenant. .

Morgan is none too pleased about this failure of Chip’s to keep his “little buddy” on as the bully in charge within administration. I’ve said it before and I’ll say it again, I totally believe Morgan is going to file to run again by the June deadline. I think his narcissism will not allow him to become irrelevant, which is what he will be without the Sheriff’s badge. Mark my words, Morgan cannot let go of the wheel. He will be claiming the citizens are begging him to run.

I did inquire about whether Haines will be getting a pay cut. I am told he will lose approximately $50K a year in the demotion, which will knock him down to a cool $100K a year.  Poor bastard will need to stop taking cruises now. But he is get his cruise on as he has been on 2 in the last month. The one he’s on now is with his pervert brother Scott. I guess they need a break from being evil.