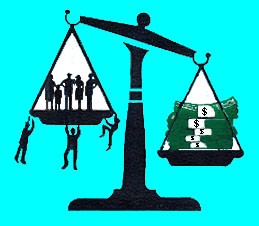 Equal in the eyes in the law, right?

Given enough time and rope, the Honorable Sheriff Morgan has finally done it. The high & mighty Morgan’s cell phone number was in Leah Manning’s phone. Now one might say that is innocent; however, I would argue you only cover something up that needs to be covered. Subsequently the investigation into other victims or offenders was “wrapped up” over a weekend. Mr. Morgan knew his name was eminently going to be revealed.

Sources within the ECSO reported that the Pensacola Police Dept pulled the raw data off the laptop and phone. Presumably establishing a checks & balance system, the raw data was turned over to ECSO to match up names to images and cell phone numbers with people.  However,  Sheriff Morgan has more enemies than friends.  There were some hold backs on that data– just in case something came out of it. Pensacola PD officers held copies of all the info. Yes, Sir David has annihilated himself  and surely his career.  This information is not disseminated lightly. In the ECSO source after source, could confirm that this is common knowledge. No one will publicly come forward, because Morgan has a reputation of retaliation and as he said, “if there are any leaks, it will be a death sentence in that you will wish you were dead when I get done with you.”

I have faith that the fellow officers in the Pensacola PD will bring forth their proof or possibly some from the ECSO.

Furthermore Attorney General Pam Bondi has been contacted to investigate Mr. Morgan’s “public records policy”.  The following 2 emails were for the same public records. Unmistakably I was required to  pay $7,000+ for emails between he & David Craig in 2009. In the same breath, Beth Mederios, Public Records Officer,  claimed to another request by a third party —for the same public records—that there are “NO SUCH RECORDS”. Which is it Sir David? EXTORTION OR FRAUD? 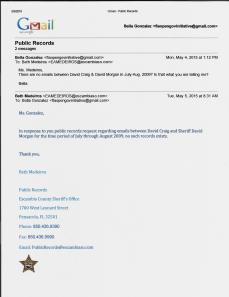