In a not-so surprising move, Greg Marcille issued a press release Friday that after investigating Morgan’s LET Fund mockery, the SAO found “no criminal violations” found. However in a letter attached to the press release, there is indication that the protocol requiring agencies to account for the money they receive, specifically that it meets the standard to justify the statutory mandates of this particular fund, has not been followed. This is funny because there is precedent that such special trust monies spent without the proper follow-up by the agencies, such as this case, were made to pay back the money. The state has not been lenient on this in the past, but seems to be ok with throwing away $1m without recovery nor punishment for not fulfilling the elected officials obligations to the community that they serve. I say throwing away because, if that money isn’t going to help train officers, buy equipment or provide for safe neighborhoods (ie the gala held by the Pensacola Opera), then another facet of the county budget must use those funds, which are taxpayers’ money to fulfill that void–or not as the case may be, leaving the community in the ranks of the highest crime within the state.

But looking past that insane judgment lapse, I’d like to take you through Friday before this press release came out.

statewide grand jury with Morgan being biggest offender of LET violation. Governors office involved…… SAO told Haines today that wrong doing was found. Gov office is expected to order statewide audit of all funds. Eric looks like he died when I seen him.

I then messaged James Scaminaci of CJ’s Street Report to ask him if he could call the SAO to verify this info. In the past, I have been given the run around by the SAO; I figured he had more pull than I did. This was @3:17pm.

I heard from a source today that something big was coming but did not link it to sao. Though he asked me about sao.

James called SAO and left message for Marcille @3:25pm. His message to me :

Marcille just left for a meeting about this very subject of grand jury investigating morgan. Spoke to his secty

Source forwarded me via email @3:32pm, the folllowing press release 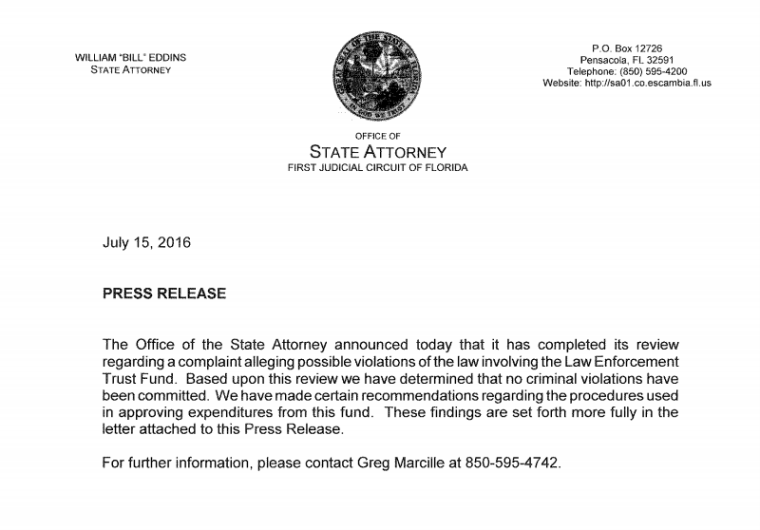 Confused, I texted the deputy who contacted me and asked him if he was sure about what he told me.

Absolutely! Haines is still barricaded in his office. Not good news.  Morgan is out of town. Just told he was talking to an attorney in Orlando on an issue the Sheriff’s Assn wasn’t covering.

Taking into account the totality of the events and the fact the ECSO admin was not relieved when the press release was issued, nor did they make some grandstand to say  they were in the clear, I believe the SAO may have something else up their sleeve.

Stay tuned….Morgan and the BOCC are not out of the woods yet.