Chapter 6 of “The Devil Got Appointed in Georgia”

We all know those people who relentlessly end up in situations laden with drama. These people genuinely believe other people bring the turmoil to them. They fail to see they are the common denominator in all these encounters.

That is the story of District Attorney Jackie Johnson. She has been involved in numerous cases that were handled questionably. She recently insisted, in a radio interview, that she remained “intentionally ignorant to the facts of this (Ahmaud Arbery) case.”  She continued on to say (regarding the reporting of her misconduct by various news outlets),  “I think it’s retaliation for me being the whistleblower on their police department,” she said.

Despite Jackie’s protests and renunciations, documentation tells a different tale. The AJC delineated this quite nicely, in their article After Police Chief Indicted, Brunswick DA Recuses Herself from Case.

“Johnson’s office has been caught up in controversy since a video of Arbery’s shooting became public last month, including calls from the public that she be removed. In the Arbery case, Carr asked state and federal investigators to review Johnson’s conduct and the man she helped bring into the case, Waycross District Attorney George Barnhill. Johnson notified Carr she had a conflict after Barnhill had already been actively involved in the case and had made an initial determination that no crime was committed. Carr has been critical of their actions, which violated state guidelines for recusals.”

For being over five counties, Camden, Glynn, Wayne, Appling and Jeff Davis, Jackie seems to be involved in a great number of “conflict cases” for her 10 years in the position.  Twenty seven. That doesn’t include the Arbery Case.

Here is a list of all the cases, she’s recused herself from in the last 10 years. 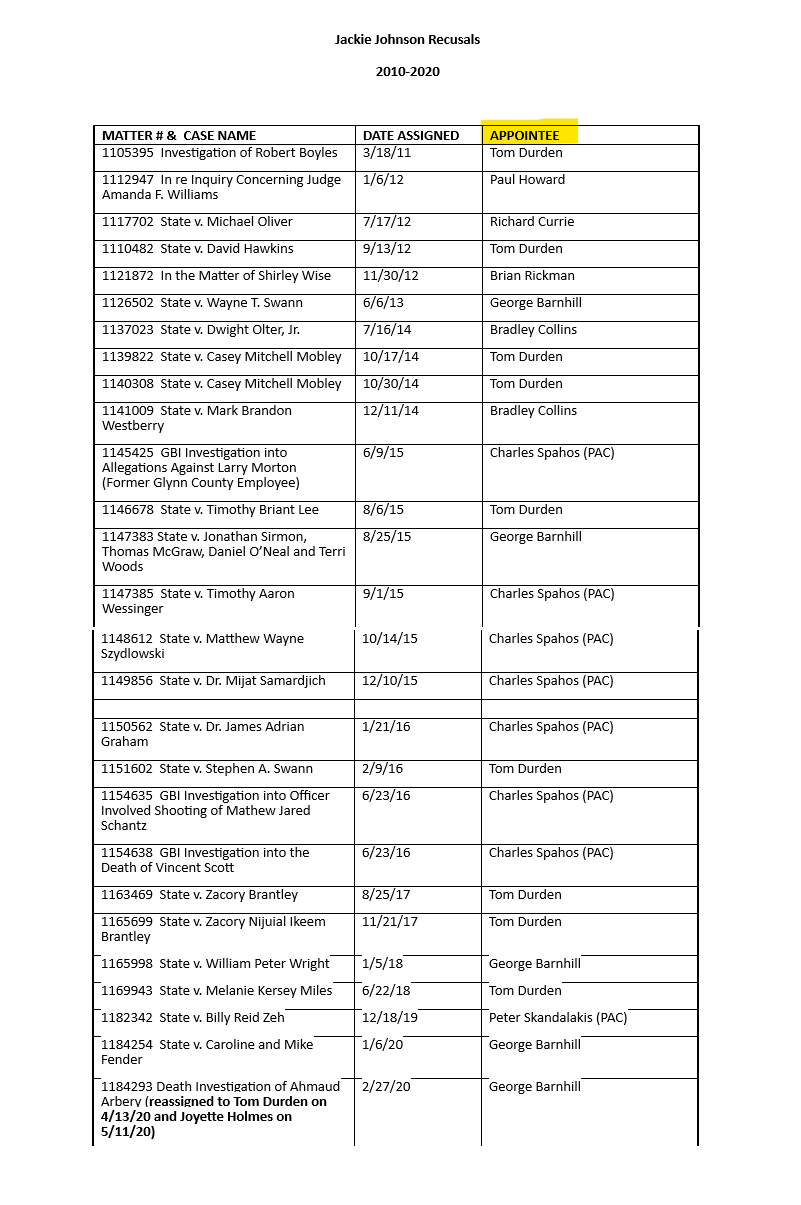 I may be a bit ignorant to legalese but the fact that there is an” Appointee” column certainly appears that Jackie was the appointer. In a press release by Attorney General of Georgia, Chris Carr in relation to the Ahmaud Arbery case, Carr states:

Carr expressly states no one had the authority to “turn over” the case to the Waycross District Attorney other than him. Yet, Jackie did. In the list of recusals above, Jackie seems to have done just that time and time again. So the problem, that appears to me, is this woman has deemed herself above the Attorney General of Georgia & above the laws of state of Georgia. Has she not usurped her authority repeatedly and customarily appointed whomever she wants, whenever she wanted?

Nevertheless, Carr says this is not procedure. This makes those of us watching amused. That’s Jackie’s home run swing. Assign another district attorney and to ride roughshod over the cases she is “recused”. If, not via the direct pressure on the assistant district attorney, then via her staff under them.

A very good example of this is the civil case filed by Debra Gann, the mother of Katie Settles Sasser. Jackie helped author the complaint according to recent email published. In fact, she aligned the civil case to dovetail the witch-hunt she has undertaken on the Glynn County police chief, John Powell. Additionally the case filed against Powell and others, is clearly political retaliation for not covering up Jackie’s culpability in the events that resulted in 3 deaths. All this can be seen in the lack of finger pointing Gann’s

attorneys toward Liberty Stewart, who played a role in the outcome of this entire massacre. That lawsuit doesn’t account for the “but for” principle in Jackie bailing out Sasser over the years beginning with the Caroline Smalls shooting. But for, Jackie’s manipulation of the grand jury, firing of prosecutors willing to push the case forward and failure to let people testify who were relevant and should have testified, it is more than arguable that Sasser, Kettles & Hall would be still alive today. But for, Jackie’s machinations, we would not be seeing the ripple effect on this Georgia community. Irrevocably, she has ridden this town into the cesspool of what we are seeing now.  Albatross, indeed.

Machiavelli said, “A prince will never lack for legitimate excuses to explain away his breaches of faith. Modern history will furnish innumerable examples of this behavior, showing how the man succeeded best who knew best how to play the fox. But it is a necessary part of this nature that you must conceal it carefully; you must be a great liar and hypocrite. Men are so simple of mind, and so much dominated by their immediate needs, that a deceitful man will always find plenty who are ready to be deceived.”

One thought on “Jackie Johnson: The Albatross of Georgia”