Wow! That is the only thing I can say.

I read about John Johnson’s speech. It didn’t go as planned. He tried to make a point by asking if women and children felt safe going to Walmart after 9pm. The woman he asked didn’t play along. She said she did…OOPS!

Next I watched Doug Baldwin’s speech.

I was very impressed with Baldwin’s articulation, coolness and value based approach. While I don’t necessarily agree with his politics, he was very persuasive. Hell, one of Ronnie Mac’s biggest supporters told me he was there and he would have voted for Baldwin had the election been held that night. He was that swayed by Baldwin’s speech.

Then I watched this:

This is just an attack on the people of the county. Sir David has lost his shit!  He’s an angry man. He has NOTHING positive to say and basically says “Don’t judge me; I didn’t want this job to begin with”.

To that I say, I agree…you should just move along, because you have just pillaged the people of Escambia County. His reluctance to be a politician was so overtly a lie. He’s always wanted to be the center of attention. His $30,000 smile is proof of that. Plus if he was so reluctant, why is he running for a third term since he clearly feels under-appreciated?  No one buys that BS.

Yeah, you used county money to feed into religious organizations that, in turn, contributed to you. Should we look at each agency you donated to, compare the staff of said organization with donations within proximate timing of their campaign contributions to you and see how that shakes out?

Again he went on about “parsed words”. 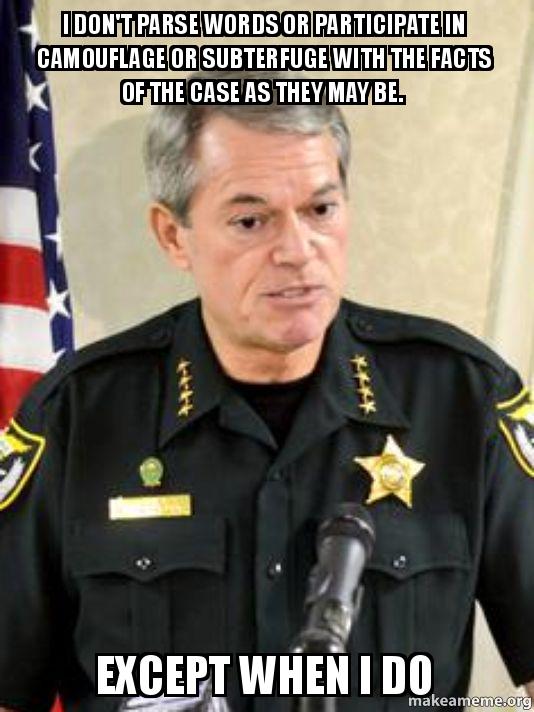 Needless to say, my feelings in regards to his speech, was a bit angry at how he blamed everyone and said crime statistics don’t show Escambia County is a more dangerous place. Numbers don’t lie. This is just January – June 2015 compared to the entire year of 2014. Already there is a big disparity that is absolutely unexcuseable.

Mr. Morgan, coming from I’m sure what you’d call, “a coward behind a keyboard”, as a sheriff, you are a liar and a FAILURE. Your job is to make Escambia County safe…no, ifs ands, or buts. The buck stops with you. Can’t take the heat? Get out of the fire or the reluctantly held seat that you didn’t want to start with?

I have been given the opportunity to take my campaign to a new website, PanhandlePolitico.com. I have a headlining article.