In my analysis of Sir David’s amassing wealth, I decided to check into the fact the man AND his wife collect Social Security Retirement early along with $200K plus income. I recall before my father died, when he collected Social Security, he couldn’t earn more than X amount back in the 1990’s, or his benefits would be reduced and/or eliminated. So I went to the SocialSecurity.gov website, this is what I found:

The Social Security system offers retirement benefits to workers who have paid into the system through payroll or self-employment taxes. Social Security sets the rules and guidelines for beneficiaries, who can begin drawing benefits as early as age 62. if you work while on early retirement, Social Security adjusts the benefit amount.

If you earn wages before full retirement age, Social Security sets an annual dollar limit and then begins to deduct $1 from your benefit for every $2 you earn over the limit. In 2015, the limit was set at $15,720. Social Security pays its benefits monthly, so if you earn $15,720 though the first six months of the year, and then start making $1,000 a month, the retirement benefit in the seventh and following months will be reduced by $500. This continues until you reach the year when you turn full retirement age, at which point Social Security applies new guidelines.

I contacted the Social Security Administration and was directed to their online calculator for benefits, based on birthdate, income and a median Social Security monthly anticipated amount. This is what the form looks like:

When I plug in Morgan’s info into the calculator, this is what comes up:

Now Susan Morgan is approximately 64 now and the last 2 full public disclosures made via the Florida Ethics Commission are for 2013 & 2014, making her potentially, eligible for early retirement at 62. Both years Social Security Benefits were paid, 2013- $ 5,592 & 2014- $ 17,028. Also, there are no 1099’s on file at the Ethics Commission for either year (2 for Susan for both years and 1 for Sir David).  Oversight?  Could be but with all the other documents provided why aren’t these simple forms provided for either of them for either years?

There appears to be some impropriety in this. We will let Social Security sort this out.

As one source asked me, ” How much money does one person need?” Especially noting the LACK of charitable contributions on the personal level but gross excesses of donations that are misappropriated through the Law Enforcement Trust fund (which are supposed to reintegrate forfeiture funds back into law enforcement programs) but instead go to every charitable organization including the Pensacola Opera, NAS glorification programs, and specific financially exuberant Southern Protestant churches that in turn provide funds to Sir David’s campaign at a rate comparable to his donations into theirs.  This is essentially money laundering LET Funds into his own campaign, as described by CJ’s Street Report.

What the hell?  Where is the oversight here? 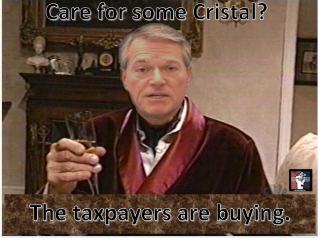