In the last few weeks, I have become familiar with a list held by all State Attorneys known as the “Brady List” or the “Brady/Giglio List”.  The purpose of this list is to be reference for the State Attorney of law enforcement officers who have been PROVEN to be untruth.  The State Attorney is bound by law to keep such a list as to not rely on these dishonored officers to be put on the stand in a trial as their documented untruthfulness makes them a liability in front of a judge and jury.

There should be uniform criteria across the states, counties, and cities as to who rises to the level of dishonesty to make this list. However, as with most things in the First Judicial Circuit of Florida there seems to be no outlined criteria, leaving the subjectivity to the law enforcement agency and no quality control to verify the authenticity of this list. So, anyone can be on that list. The following are the lists of current Brady Lists held by the State Attorney Bill Eddins office:

Please notice that in the Escambia County List, particularly, there are not case numbers to justifying the placement of the officers’ names; also the “charges” outlined, in many cases. Ambiguous rationales like “misconduct”, “insubordination”, “improper conduct”, or “moral character”. Those are inexact, subjective terms without any specific connection to perjury or untruthfulness.  The letters referenced are to defense attorneys in the area informing on the discredited officers. But the problematic issue is who makes this list and what offenses put an officer on such a list. Is this being used as a weapon to punish out of favor officers? If it is, let the defamation suits begin!!! 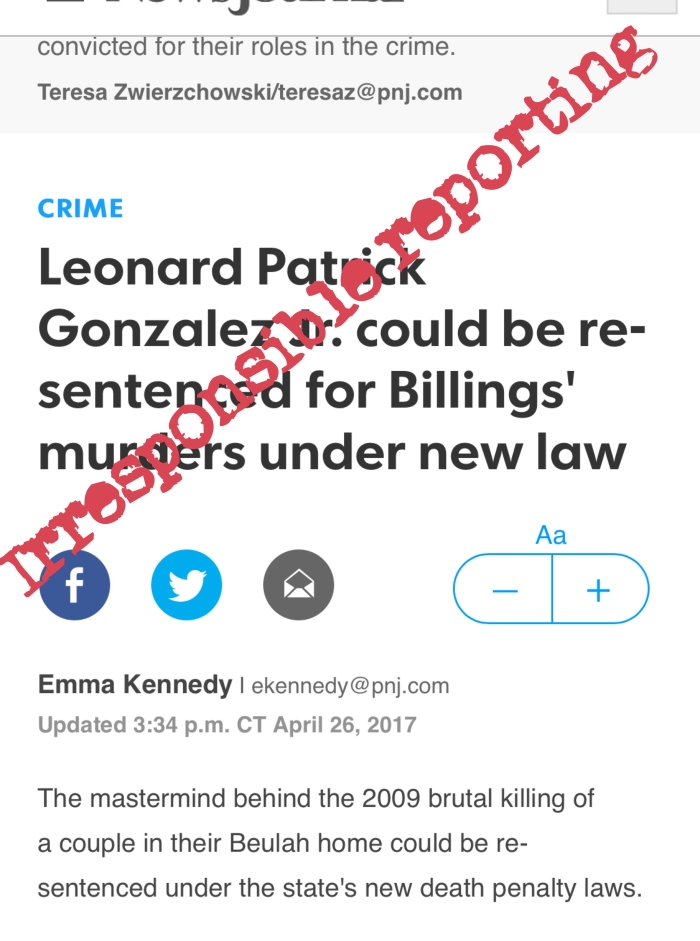 It was reported today in a big red BREAKING NEWS banner by the Pensacola News Journal “Billings Killer Mastermind Gonzalez to be re-sentenced”.  Wow…the irony just glows in this case. If the case is to be re-sentenced, a new jury would be impaneled. The jury pool is now subconsciously already being swayed with the irresponsible words that will now be forever out. “Mastermind” & “Ringleader” are 2 phrases that will easily push potential jurors to go for the more severe penalty of death.   Emma Kennedy and I had a tete-a-tete about this and Ms. Kennedy said that potential jurors have the option to not read her article using both buzzwords to describe Gonzalez. Ms. Kennedy must not know that the PNJ is the MAIN source of news for the majority of Northwest Florida. Gannett knows that. Look at their revenue in the area.

Ms. Kennedy is also ignorant to the power of the internet to keep stories alive in perpetuity.  Every story that slanders and defames Gonzalez is at the whim of any user via Goggle. You can get 250+ stories in one sitting.  Every biased comment ever slung at Gonzalez can be rounded up in a nice little bow. Not once is he ever referred to as the “alleged ringleader” or “alleged mastermind”. After all, that reference was given to him by people trying to leverage their own escape from the death penalty.

Maybe since Ms. Kennedy has been improperly trained but surely someone at the PNJ has some idea of the impact of media and the potential for denying anyone going to trial their 6th amendment right to a fair trial. They seem well versed in the 1st amendment when they feel their rights have been infringed, but forget it, if you are on the other side of the camera. The more grave the crime, the higher the stakes for the accused as well as the higher potential for confabulous stories for the “mullet wrapper”.

I wonder if I wrote 250+ posts on the incompetence of Ms. Kennedy if she may be impacted by that professionally. My blog ranks pretty well on Google. Maybe I should test that theory.

Moral of the story is that words carry power.  Not understanding the power of those words is willful ignorance for a journalist.