My last post on Underhill resulted in the almighty Sheriff producing a video to refute the claim that the Perdido substation was closing. Sir David is using semantics here. That substation is effectively a back-up or satellite station; the ECSO is still in possession of it but no one reports there. Now, it appears the police presence in that area is minimized. The Sheriff claims it is due to the shifts in crime. However, the trends according to the crime map of calls responded to in the county shows a consistently higher rate of crime on that side of town.

But my point is, I pointed a finger at Underhill and he tried to create damage control by contacting the Sheriff and then the Sheriff making a video.  Underhill was trying to minimize my message.  The problem is you can’t pass off a zebra as a horse. The situation is what it is. There is no spin to be done. Meanwhile there are other issues of greater importance such as the Osceola community’s sidewalk problem in which Underhill has ignored wholly.

Underhill has a history of trying to manipulate the community. The following post clearly shows that.

Underhill envisions looking at Escambia’s budget with fresh eyes, approaching it from a “zero-sum” perspective. And he would like to see the county move from what he describes as “personality-based politics” to a more “process-based” style of governance….. Because when that’s a part of the discourse about whether or not an idea is good, really what you’re saying is ‘I know this person and so I trust this person, and so I’m not even going to look into the merits of the idea, it’s just coming from somebody I trust.’

Commentary: I have no problem with the “zero-sum” perspective. It is practical; the problem is the last part of the statement–“Personality Based Politics”–is where I have take immense issue.

“Personality based politics” is a fancy phrasing of the “good ole boy system”.  It essentially means people are electing people they know and like regardless of qualifications.  Here’s the problem: that is a basic tenant in politics. If people don’t “like” you, you don’t get elected.  Take the Nixon-Kennedy debate. On the radio, Nixon was considered the winner because of his ideas; however, the television viewers thought Kennedy won by a landslide. Why did that happen?

Even though Kennedy had less quality to his speech, he delivered it with charisma that television viewers took to immediately. Let’s take the more relevant, David Morgan in his “landslide” victory. People elected him because of his persona that he portrays, not his achievements; not his shady finances; not his increasingly growing crime stats; not because of his complete loss of employee respect. None of that mattered because he flashed his “$30K” smile and put his face in as many places as possible. His personality (publicly only) won him the election and is what kept Underhill in his position because he is Morgan’s bitch.

The hypocrisy of his statement is only half the disturbing part of all this.

You may recall, we were being pushed to purchase the old AES building on W Street, north W, it’s just south of the Pentecostal church. We were under pressure to purchase that, for some exorbitant amount of money. It’s just steel shell building with a stucco facia on it. And we were needing to buy that for our corrections department — ‘Because we got people working at desks out in the hallway.’ Ok? That was Tidwell that said that.
I said, ‘Ok, well, show me.’ You know how many desks were out in the hallway that people were working on? That’d be zero.
Ok, that’s called an ‘Escambia-fact.’ It’s an emotional thing, it sounds pretty meaningful, but when you actually peel back the layers it’s not there.

His article continues to belittle the Escambia citizens in that he talks of “Escambia facts”, which are facts people claim but when evidence is looked for after the fact, it proves to be untrue. Now, let’s understand something. The statement was made about people in the hallways—time passes—Underhill responds. What happened in the time passing? In my experience, Underhill most likely corrected the matter through others and then called out the complainant after the issue was quickly covered or fixed. He has does this in situations I have called him out on-twice so far; so this is a pattern of how he handles things. This “Escambia fact” was indeed a fact when it was brought up—I would bet the farm on that, but Underhill manipulated the situation to make him the good guy and the complainant the bad guy.

Why? Why not man up and fix the issue and not cast stones on the people in the community? It is the actions of a man trying to prove his worth by belittling others. His greatest asset should be showing humility and fixing issues rather than covering them up.

The most disrespectful thing implied in this article is the portrayal of the community by someone who does not “get it”. There is a thing in the South that is a fundamental undercurrent of the culture–Southern Honor. Southern honor is what makes Southerners hold integrity as the pinnacle of everything. Southern honor says your name is all you have and you have to live up to every single person who carried that name from the beginning. We don’t take that lightly. We honor others that show that same respect, which might be construed as “personality based politics” because we do look to the people who appear to be most like us. Southern honor is ingrown in every person who ever grew up with lack. When you have nothing but your name to hold onto, it becomes everything.

Underhill doesn’t get it. He’s seen as an outsider because he doesn’t carry this trait. Morgan feigns this and uses against the community but Underhill doesn’t get it. He can’t grasp the culture of the people he is ruling over. Look at some of the comments on social media. He ignored the Osceola community’s concerns with flooding; he looked to force out the Tomato Man and Georgio’s Greek trailer. People who have been figures in the community that beloved by most. Why?  Here is Underhill’s response to Stuart Kaplan’s questioning of the food truck, Tomato Man issue:

Stuart,
Please, try to get a handle on some basics of a civilized society. There have to be some simple standards, or are we advocating for pure anarchy? The County is very receptive to food trucks, and they prosper throughout the County, with no problem meeting our simple standards.

Why is it that a citizen who expects the rules to be followed and calls code enforcement deserves your profanity and bile? Moreover, while you guys rant about the oppressive government in everyone’s business are you simultaneously ranting about how the accident on the bridge last week was the government’s fault? Y’all always fuss about the accidents on the Key and say we need a four lane. Considering that almost every accident on the island involves intoxication, distracted driving and/or excessive speed, aren’t you advocating for a $100 Million government expense to overcome failures in personal responsibility?

I know that those who long for the good ole days of corruption and privileged access have a hard time with this, but in Escambia today and for the forseeable future, “One set of rules applies equally to everyone all the time.”
Respectfully,
Commissioner Doug Underhill

This is a disrespectful response that doesn’t do anything but turn blame back around. He twists facts to make him look like he person being victimized; What did he say that was productive or doesn’t focus on blame?  ABSOLUTELY NOTHING!!

Let’s apply the rules of ethics that Underhill broke when he had the Sheriff endorse him on camera.  UNETHICAL! Yet when it was brought to the Florida Ethics Committee, no fault was found. Yet the canons state:

Fla. Code Jud. Conduct, Canon 7A(1)(b) Except as otherwise authorized, a judge or candidate may not publicly endorse or publicly oppose another candidate for office.

Yet we have this: 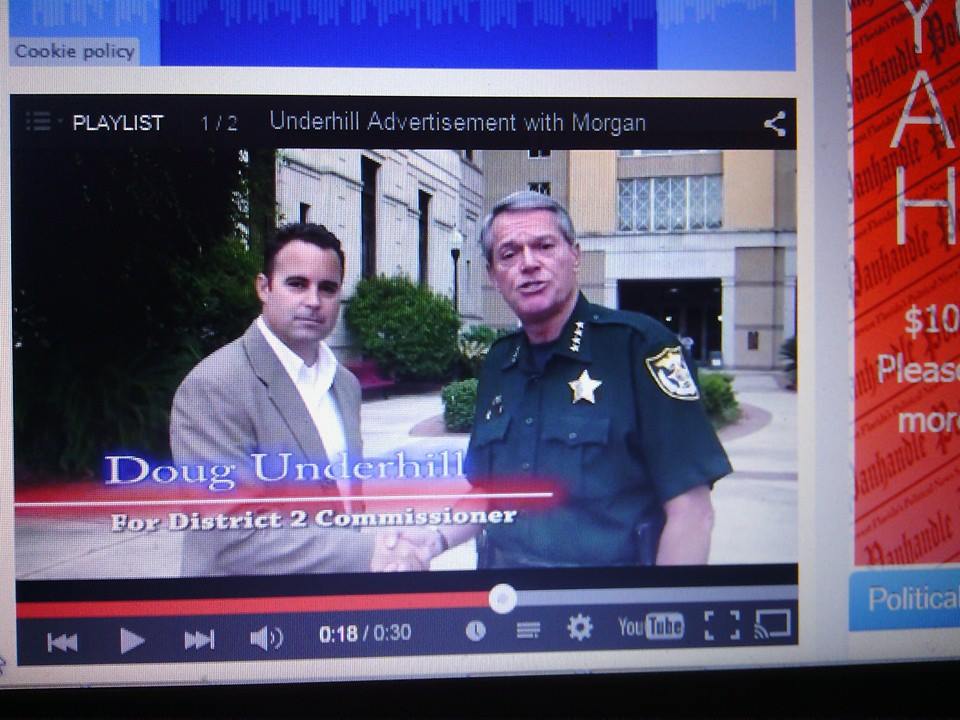 Underhill does as he wants while ignoring his constituents, belittling the culture of the people and recklessly speaking about things to which he has no knowledge…ie the sociological culture of the South & Southern Honor.
Might I suggest a good read for Mr. Underhill? Southern Honor: Ethics And Behavior In The Old South by Bertram Wyatt-Brown
The irony in all this is that Underhill wants respect because of his role as an elected official. He also claims that merit not personality should garner that respect. Yet his merits have not garnered JACK. The only reason people are cordial to this jackass is because of the culture of the community….the same culture Underhill belittles continually. 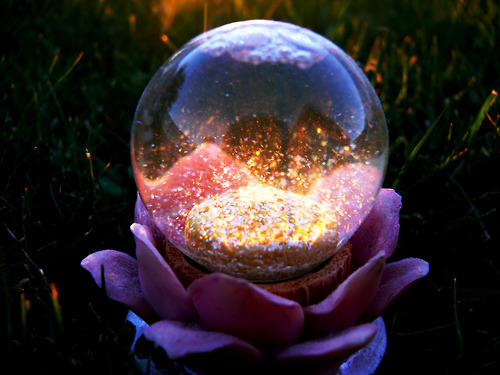 PREDICTION: The first words out of Underhill’s mouth will be that I have no idea of what I’m talking about. However, understanding respect and community without corruption is simple. There is no mystery to it. It is not that complicated.

Mr. Underhill, people elected you; do your job without disrespecting the community. It doesn’t get more basic than this. Many have done this before you and will do this after you. Blaming the community makes you look weak and that speaks to your grasp of Southern Honor. Should you take issue with my post, MAN UP AND COME TO ME. DON’T BE A LITTLE BITCH AND POST TO FACEBOOK PAGE YOU KNOW I CAN’T RESPOND TO OR EVEN VIEW.