So Sir David gives all this money to special interests in return for campaign contributions, but personally, he supports very little. In being valued at over $1 million last year, he and Susan gave away $4600 in charitable donations. This year, so far, they paid off $92K on their home. Where is all this money and real estate boom coming from? Is there anyone else besides Bill Eddins who is showing this kind of financial growth out of a public servant’s pay??

Seriously, I got all over Gene Valentino’s ass about being so caught up in money, but he has a business that he profits from. This is supposed to be something else.

So in comparing Country Boy Bill Eddins net worth from 2013-2015, there is no wealth growth nearly close to Morgan’s. He owns more real estate, yet his net worth doesn’t grow exponentially year over year.  These are apples and apples being compared…WTF?? 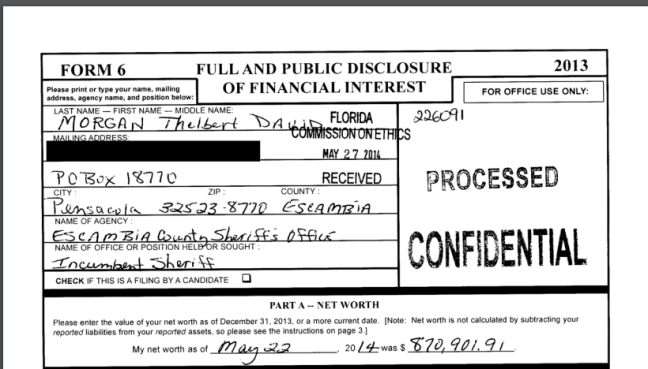 * Note: I do realize his wife’s income is included. However, she is a professor at Pensacola State. Her income is far from lucrative. They have a few rental properties but they are low end. There is also $100k/yr in pure pensions for them both. That on top of the $145+k/yr as Sheriff STILL DOESN’T EXPLAIN THIS AMOUNT OF WEALTH. The problematic part is the high flux of the numbers. $27 K a month?  Really??